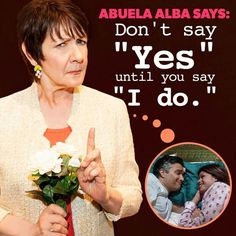 In the keywords essay “Identity,” author Karen Coats begins to unravel how to define the complex entity that is a person’s identity.  The essay notes that identity is more likely to be conceptualized as a goal or achievement, thought of as developmental, and dependent on the influence of several variables including race, culture, and religion.  In the same way that identity is influenced by multiple factors, it has an influence on even more aspects of our daily interactions, thoughts, and decisions.  Both The Bluest Eye by Toni Morrison and the television program Jane the Virgin focus on representations of identity in the way that it is inextricably tied to virginity and the maintenance of a “pure and innocent” body identity.

For young Frieda MacTeer in The Bluest Eye, her body identity is of major focus after being molested by Mr. Henry, a boarder at her family’s home. After the incident occurs, a neighbor suggests that Frieda see a doctor because she might be “ruined,” which makes Frieda extremely upset.  She and her sister Claudia are confused by what being “ruined” means and the two worry that Frieda will end up like the Maginot Line. By tying Frieda’s worth to her virginity, a confusing and troublesome example is set for both Frieda and her younger sister.  The conflation of sexual assault and sex leaves no room for tending to the highly-important question of consent. Frieda’s sexual identity is suddenly forced upon her. Although she understands Mr. Henry’s actions were inappropriate and wrong, she can’t quite verbalize what they mean and must base her interpretations of what happened on her parents’ reactions to the situation.  Her mother is concerned with her being “ruined,” and Freida must attempt to determine exactly what that means. As a young girl, being told you might be “ruined” because of the wrongful actions of someone else is certainly confusing and scary. Especially as a child, it is difficult to understand the connection between being “ruined” and the loss of one’s virginity, and even more so when that valuation is made by a parent or another trusted adult figure.

Similarly, in the television show Jane the Virgin, protagonist Jane Villanueva’s virginity is a huge part of her identity.  Although Jane is many things, including a daughter, granddaughter, friend, aspiring novelist, and girlfriend, nothing seems to make up a greater portion of her identity than her virginity does.  Each episode, Jane is reminded of her vow of celibacy in some type of way. Often, it is by her grandmother Alba, who strongly encouraged Jane as a young girl to make the promise to save herself until marriage (as can be seen in the featured image).  As she matures, Jane recognizes how heartbroken her ‘abuela’ would be if she were to engage in premarital sex, which is presumably another motivating factor in the maintenance of her virginity. The title of the show is, quite literally, Jane the Virgin.  Being a virgin is her single most identifying factor.  Although she is an adult and understands more about sexuality and the difference between consensual sex and molestation (unlike young Frieda MacTeer), Jane’s character in the show still exemplifies the near-unreasonable amount of emphasis placed on the importance of virginity and how that relates to a girl or woman’s identity.

Jane the Virgin is one of my favorite shows, but I’ve never truly given any consideration to the extent to which Jane’s character on the show and her identity is actually tied to her virginity.  That component of her identity is an influencing factor in the way she goes about her daily life as well as how others view her. Although Frieda is much younger and doesn’t fully grasp the concept of her virginity and how consensual sex differs from being molested, The Bluest Eye presents another example of identity and virginity being interrelated.  It affects how others see Freida (like her mother and neighbor) as well as how she sees herself.  These are certainly not the only two examples of a girl or woman’s identity being reduced down to her body and the status of her virginity.  But, it’s about time that we recognize virginity is not a fair indicator of worth and, on the flip side, that an absence of virginity in no way means that a woman or girl is “ruined.”