In Elizabeth Medina’s article Dora the Explorer, Your “Average” Latina, she addresses the issue of Dora being “average”. Medina states that Dora is part of an “unspecified Latino culture”. This issue is also quite prominent in the American Girl book series about Josefina. In Josefina’s story we learn that she is Mexican-American, but the issue is that she is one girl representing all Latino cultures within the American Girl company. This issue of using the term “Latino” so casually is brought to our attention by Phillip Serrato as well. In his essay “Latino/a” from Keywords for Children’s Literature, Serrato brings up the issue of the classification “Latino” being too broad. Serrato calls Latino an “umbrella term” because of the many people who fall under it. He explains how the use of the word “Latino” is far too overgeneralized. This can clearly be seen in both Dora the television show and also in the Josefina book series. As Medina said in her article on Dora, the TV show “portrays the image of the Latino as one very generic group”. Dora’s background is never explicitly mentioned. There is no knowing of whether Dora has a Mexican, Costa Rican, Guatemalan, or Puerto Rican background. All we know is that she is “Latina” and because of this label she is given stereotypical Latina features: dark hair, dark eyes, and dark skin. Although we know Josefina’s background, she parallels with Dora by the fact that she is a token for all Latino/as within the whole American Girl company, just as Dora is a token for all Latino/as within her own single character. Overgeneralization is an issue because it creates ignorance of other cultures. What if all people who looked “white” were put into the same cultural box. Would a German-American girl then be depicted to be the same as an English-American or Russian-American girl? In this perspective, it makes it so much easier to understand how absurd the general use of “Latino/a” really is. 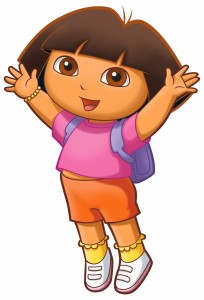