Recently, Jaden Smith made headlines by being the first Louis Vuitton’s male model to model their women wear. 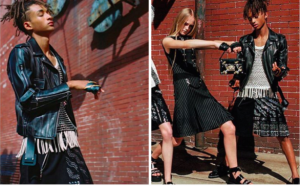 By using the Keywords passage “Girlhood” in Keywords for Children’s Literature by Jacqueline Reid-Walsh, we can compare what it means to be a girl now, in the 21st century, versus when the American girl Kirsten grew up, in 1854. While the way Kirsten is described in Meet Kirsten  is consistent with the theory that the word “Girl” “derives from the Old English word for dress or apparel,” Jaden Smith’s new gig challenges traditional ideas of gender specific clothing. More specifically, men wearing women’s clothing, because as Vanessa Friedman of the New York times pointed out, “Wearing a skirt comes as naturally to him as it would to a woman who, long ago, granted herself permission to wear a man’s trench or a tuxedo.”

Kirsten is always drawn with dresses on, and her outfits of dresses and skirts are referenced throughout the book.

In 1850’s when she grew up, “performing” your gender had a lot to do with what you wore, even more than today. Clothing was (and largely still is) the most immediate way to categorize someone as “female” or “male”.

What Jaden Smith’s new modeling endeavor does is break down that social construction. It challenges not only what “girlhood” means, but what “boyhood” means. Someone who identifies as a boy performing how a “girl” traditionally performs her gender directly contradicts our programmed system designed to put people into categories of gender.

Kirsten wearing a dress in 1854 categorizes her as a “proper” girl in her society. Jaden Smith wearing a dress now, dismantles the entire social construct that Kirsten adhered to when she wore a dress.

9 thoughts on “Dresses: What They Meant Then and Mean Now”