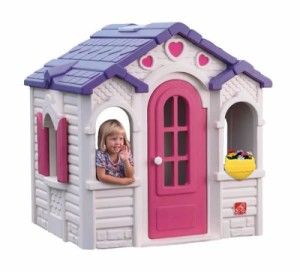 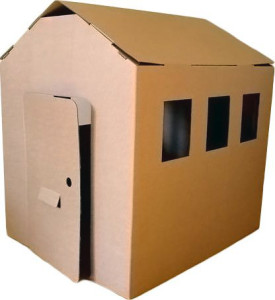 How many people had a playhouse growing up? Nearly everybody. If not you specifically, then you at least knew somebody else who did. They came in every shape and size; my playhouse was a couple of cardboard boxes that our washer and dryer came in, while my friend had one renovated out of a calf hutch. They are available at Walmart for $150, or they can be custom-built miniature houses with running appliances for upwards of $10,000. The exteriors of playhouses may not be similar, but the type of play done in them is very nearly identical. “Playing house” is one aspect of childhood that most girls take part in to imitate the everyday actions they observe in their home. Pretending to cook a meal, clean the house, or reprimand the “children” are common themes of playing house. The March girls in Louisa May Alcott’s Little Women perform similar actions. In Little Women, the idea of “domesticity” represents the girls learning household duties, while modern playhouses propose “domesticity” as something done for fun. The chapter titled “Experiments” goes through how the girls prepare a meal and run the household with little success. In the end, they learn the lesson that working hard evokes “a sense of power and independence” (Alcott 118). In popular culture, the concept of playhouses encourages young girls to practice domestic tasks in a playful environment. Along with playing how to run their house, young girls in modern times learn they do not have to be confined to the home. A woman can have a job and career while still maintaining a domestic environment. The idea of having “the best of both worlds” is a modern notion, since the only option for the girls in Little Women is being a housewife; any other things they wanted to do would come second to running their household. The connotation of domesticity has changed over time, reaching its modern meaning of girls practicing domestic actions in the safety of their playhouse.

6 thoughts on “Let’s Go to the Playhouse!”