In Louisa May Alcott’s Little Women and many of the American Girl Doll novels, we have seen the young, female protagonists playing with dolls on numerous occasions. In Little Women, Beth takes on a motherly, compassionate role for her dolls that her other sisters have cast off. She seems to care for them as though they are real. This mirrors the domestic role and chores she takes on in the March household. Similarly, in the American Girl Doll series, the characters are also fond and protective of their dolls. I remember feeling the same for my dolls when I was younger. My sisters and I would pretend we were their mothers and play with them for hours on end.

After talking in lecture, I realize the act of playing with dolls may have  been a semi-subtle mechanism to prepare me for motherhood. While playing with my dolls, I would typically pretend we were at home, cooking, dressing up, or playing with friends. Unknowingly, I was acting out a very domestic life with my dolls. In Claudia Nelson’s Keywords essay, she says the word domestic “carries a connotation of the old-fashioned, especially in a world in which fiction for middle class girls was expected to facilitate adjustment to home duties and focused primarily on the interior, rather than on outdoor adventure or imperial conquest” (67). After reading, I realized that Nelson’s idea of domesticity seems to coincide with how Beth March and I interacted with our dolls.

In a Madame Alexander blog post, positive developmental effects resulting from doll play are listed (http://blog.madamealexander.com/5-incredible-ways-doll-play-effects-child-development). The 3rd reason they offer is that it helps children “develop caring and nurturing skills.” While this may be true, society often categorizes doll play as a “girl activity” so are dolls really just preparing young girls to be mothers? I am happy to see that children are becoming more encouraged to play with whatever toy they please but in the time Little Women was set (and perhaps even when I was young) were dolls used in order promote domestic life? In Keywords, Nelson goes on to quote another woman who talks about the assumption that “no woman could develop or soar properly, and cook, scrub, sweep, dust, wash dishes, or take care of babies at the same time” (70). This quote caused me to question whether domesticity gets in the way of women’s ability to “soar.” What do dolls have to do with this idea? 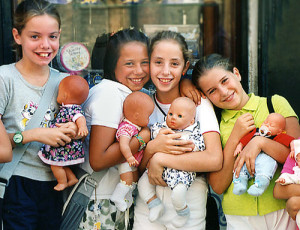 8 thoughts on “Do Dolls Breed Domesticity?”