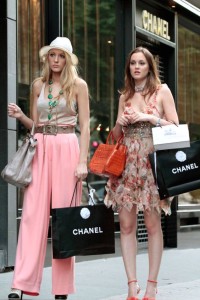 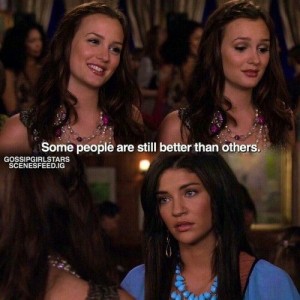 Little Women and the popular teenage series Gossip Girl both share the notion of “class” represented in a way that shows particularly the upper class as a coveted lifestyle full of respected individuals that present their power through materialistic consumption and display. Meg’s few days at the Moffat’s expose her to this. Meg initially struggles to fit in with the others at the party, as her worn dresses did not allow her to do so and left her feeling embarrassed. Her girlfriends convince her to wear one of their dresses for the night. Laurie questions her judgment yet Meg later exclaims, “I’m not Meg, to-night; I’m a doll,’ who does all sorts of crazy things (94).”  Though Meg confesses to her mother, she was easily convinced to wear the dress, become “one of them,” and simply consumed by the lavish lifestyle.

Similarly, Gossip Girl focuses on the lives of several wealthy Upper East Side teenagers throughout their high school and college years. They place a high importance on fine clothing, shopping sprees, gossip, and manipulating other’s lives, as can be inferred in the images and screenshots from the show above. In Keyword’s for Children’s Literature, Elizabeth Bullen’s essay discussing “class” mentions Gossip Girl saying the series,” conflates class status with the conspicuous consumption of luxury goods, excluding those who fail as consumers of taste and distinction (51).” The characters often spend foolishly, and use money to solve there problems or bribe others, while mocking and belittling those who cannot. We as viewers get a glimpse into the upper class lifestyle just as Meg did, and we are left wanting more. We lust for their lifestyle of fancy clothes, five star restaurants, and lavish parties just as Meg has, and those without these markers of class get ostracized. This reoccurring theme of class associated with excessive consumption becomes problematic for children’s literature when the main character is “rewarded with social mobility (Bullen 51).” If children and young adults are repeatedly exposed to the idea of class and more specifically the aura of the upper class in literature, television and film, then we are perhaps facilitating realizations of their own class standing and encouraging a want for this desirable lifestyle.

5 thoughts on “A Class Consumed with Consumption”