The mindset of men being superior to women has existed for centuries. In Keywords for Children’s Literature, Erica Hateley says, “The ideology of patriarchy has come under critical scrutiny primarily because it has been used to locate characters and readers within the specific binary logic of gender relations, which historically subordinated the feminine to the masculine” (87) in her essay on “gender.” She points out that gender has “dictated a specific vision of social relations and organization” (86). Hateley means that the standard gender roles that have been present involve men holding more power than women. The satirical news site called “The Onion” posted a video entitled “The Onion Looks Back At The ‘Wizard of Oz’” which analyzed a deeper meaning behind the classic movie. Peter K. Rosenthal, The Onion’s movie critic, starts off by saying that The Wizard of Oz is about “the terrifying situations a young female may find herself in without the proper supervision of a male companion.” Right off the bat, it is clear to the viewer that this discussion is going to be extremely sexist. Rosenthal continues with numerous examples from the movie that support the view that women need to be led by men. “Throughout her perilous journey in the Land of Oz, Dorothy is accompanied only by a batch of what can ultimately be called fully emasculated male figures.” He decides Dorothy felt so lost in Oz because the lion, the scarecrow, the tin man, and also the Wizard, were not masculine enough to help her. 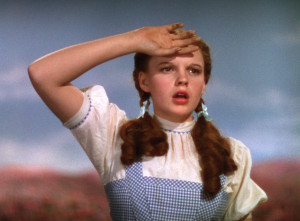 This video takes a beloved movie and twists it to seem extremely misogynistic. Although it is a satire, this theme of women being inferior to men exists in Little House on the Prairie. Pa is evidently the leader of the family and makes all of the important decisions, like moving from their home. The girls cannot do certain things when Pa is not around as shown with the quote, “Outdoors was too large and empty to play in when Pa was away” (208). Laura’s father gave her and her sister a sense of security and protection. “Laura and Mary went back to sleep, very comfortable all over. Everything was all right when Pa was there” (224). They required a male figure nearby at all times in order to feel safe. The radical and offensive views found in The Onion’s satirical film review about gender occur in Little House on the Prairie and are accepted as the norm. They have existed throughout history, and I wonder when these views of superiority will be extinct.

5 thoughts on “Somewhere Over The Rainbow”