“66% of 4th grade girls say they like science and math, but only 18% of all college engineering majors are female.” This statement is projected at the very end of Verizon’s commercial which was released in June 2014 entitled “Inspire Her Mind”. The commercial brings to light the struggles that girls face when they show interest in careers and fields of study that are dominated by men. Girls are told that they can’t be good at, or try to succeed in scientific and mathematic fields such as engineering. 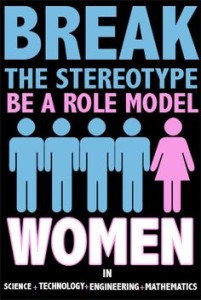 This video represents the keyword “gender” by exploiting the way in which girls are discouraged from pursuing certain types of careers involving more “masculine” forms of work. The essay in Keywords For Children’s Literature on gender written by Erica Hateley says, “children’s texts ‘presented boys in fiction as movers, doers, explorers, adventurers, creatures of action, guile, mischief, intellect, and leadership. It presented girls as tag-alongs, subordinate to boys initiative and daring, relatively docile, passive, emotional, and unimaginative;’” (87). We can see these behaviors represented in the commercial. The mom in the video tells her daughter that she’s too passionate about her science project, and her dad tells her to be careful and let her brother use the drill. Towards the end, the daughter looks at a flyer for the science fair, showing some interest, but puts on lip gloss and walks away instead of looking into it further.

Little House on the Prairie also shows the stereotypical gender roles of women’s work. We see Laura, a tomboy, showing interest in adventure and action, Ma however, discourages these sorts of behaviors and gives Mary and Laura more “feminine” things to do such as cooking, cleaning, and taking care of baby Carrie. Women have always struggled to escape from their gender roles in the workplace. Commercials such as “Inspire Her Mind” by Verizon make a huge statement towards encouraging girls to pursue their true passions instead of what society has deemed as “feminine work”.

6 thoughts on “Inspire Her Mind”