Whether we wanted to or not, as young girls we eventually came to the widespread realization of how girls were expected to dress, look, and talk, as well as which activities were considered to be feminine and which were masculine. In her Keywords for Children’s Literature essay about “gender”, Erica Hateley discusses how “specific constructions of gender…allow or disallow certain behaviors or experiences on the basis of biological sex; and dictate a specific vision of social relations and organizations” (86). Hateley’s claim here is referring to the distinct gender roles society has been placing on us for years. These gender roles are displayed in Louisa May Alcott’s Little Women through the character Jo. For instance, after Jo “boyishly” whistles and puts her hands in her pockets, her sisters quickly address her “inappropriate” behavior by saying, “Don’t, Jo; it’s so boyish…I detest rude, unlady-like girls” and “You are old enough to leave off boyish tricks, and behave better, Josephine. It didn’t matter so much when you were a little girl; but now…you should remember that you are a young lady” (3).  This exemplifies the common idea that a lady was not to do anything “masculine”.

In her text Hateley also mentions Bob Dixon’s opinion that “there’s no reason why girls shouldn’t play football, climb trees and get dirty, no more than there’s any reason why boys shouldn’t play with dolls if they want to and take an active interest in cookery” (89). By quoting this, Hateley highlights the fact that there are certain activities that society has deemed appropriate or inappropriate based on a person’s gender. This concept of gender roles is the main idea in the popular 2006 movie She’s the Man, where Amanda Bynes plays a character who is forced to impersonate her brother in order to prove that girls can play soccer just as well as guys because when she wanted to tryout as a girl, the male coach and players all laughed at the idea of a girl playing a “men’s sport”. She’s the Man is a modern and comedic demonstration of how gender roles and gender inequalities do still exist in today’s society. In order to challenge these traditional gender roles Hateley states that “all behaviors should be seen as available to all young people, regardless of their sex” (89). I think that as our society keeps evolving, these traditional gender roles will continue to be challenged more and more, however, I wonder if our society will ever truly be rid of constituting traditional gender roles. 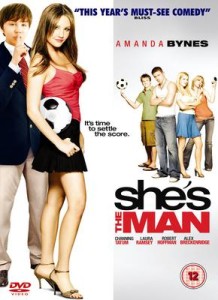