The idea of femininity, gender roles, and gender expectations is often debated in modern society specifically pertaining to women. However, as gender-fluidity, transgender, and the gender queer community progressively enter the mainstream it has become increasingly more apparent that femininity does not only apply to the biological female. 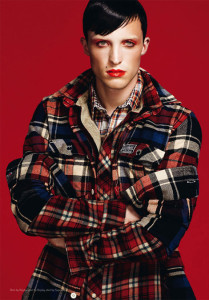 The Keywords essay Girlhood defines girlhood as being “the state of being a girl; the time of life during which one is a girl” (92). This definition seemingly fits closely with Louisa May Alcott’s Little Women. However, there is one discrepancy. The character of Laurie is frequently seen interacting with the four girls and participating in their, often “womanly”, activities. He is shown to be a bit of an outcast with other boys his age and is not represented as being particularly masculine. Do these characteristics and actions perhaps qualify Laurie as a participant in “girlhood”?

This gender bending in men, as stated above, is becoming more and more popular. Take, for example, the highly acclaimed musical Kinky Boots. This show follows the life of a shoe maker who becomes friends with a transvestite and subsequently begins to make shoes specifically for men who dress in traditionally feminine apparel. Lola, or Simon depending on the gender they are representing themselves as, often discusses her childhood as a feminine boy. Her father wanted her to grow up and be a boxer, to exhibit the stereotypical masculine traits, but Lola found that she preferred trying on dresses and participating in feminine activities.

Though Lola is a much more extreme example, both her and Laurie exhibit deviations from the standard experience of “boyhood”. So if the two of them are not experiencing boyhood does that mean they are experiencing girlhood? My question is, what is it that defines a person’s experience as being girlhood? Is it biological sex? If not, is it possible that girlhood is being experienced by those who don’t identify as female?

8 thoughts on “The Feminine Boy”