American Girl and American Girlhood is probably one of the most interesting and fun classes I’ve taken at UW, which is why it makes sense that I talk about it a lot and tell other people to take it!  A few weeks ago I was sharing about the class with one of my friends which lead to a discussion about the American Girl Doll Company.  She told me about a really cool article she had seen on Facebook where a young girl from her hometown in Antigo, Wisconsin (represent!) had made a petition on change.org and posted a video sharing her story.  In the video, 11 year old Anja Busse describes how she was recently diagnosed with diabetes and feels so different, like her life has been turned around.  She asks the American Girl Company to make diabetic accessories for her American Girl Dolls so that they can be just like her.  You can watch the video Here.  Anja’s primary goal is that everyone would feel good about themselves, no matter what disability or difference they might have.  After many Facebook shares, with just 4,335 supporters, Anja got her wish and American Girl released diabetic accessories.  You can view them in the American Girl Doll Store Here. 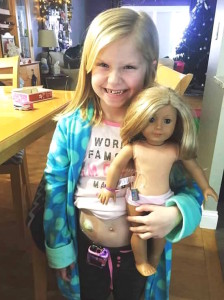 Although a keyword like “ability” (or disability) may have fit this post a bit more, I argue that this story also fits into the keyword essay for “childhood”.  Karen Sanchez-Eppler states that it is important to recognize the contradiction between what a society’s ideas of childhood are and the actual lived experience of a child because they are two very different things.  One society’s view of childhood might include ideas of play, education, and family.  However, that view very rarely takes into account pieces of identity that affect children’s perceptions of themselves, like ability.  I think the fact that American Girl has expanded the accessories that it offers to include things like insulin pumps is huge because it tells girls that their experiences of girlhood are recognized and should be celebrated.

Disability and difference was also seen in the American Sunday School Union’s “The Choctaw Girl” which used Tewah-Hokay’s back injury as a way to exemplify her goodness in suffering for the Lord without complain.  I believe that this text was written for white children and used disability to set an example for how they should behave and trust in God.

Anja wanted her disability to be recognized by the American Girl Company, not just for herself, but for the thousands of million other diabetic children in the world who feel that they are different and that there is something “wrong with them” because of their disease.  Anja wanted to make this happen so that those children, no matter what set them apart from others, would feel good about themselves and feel comfortable being who they were.   I think that the American Girl Company recognizing other’s differences is a step in the right direction, a direction that celebrates diversity and doesn’t put children down for not falling under the standard norm.