As a middle class, average girl growing up, it was always expected that I would like princesses. They were sparkly and feminine and were always swept off their feet by their handsome prince. For all these reasons I did not like princesses. I always felt that they were portrayed as very weak and needed help from a man. I was a self-proclaimed tomboy so this idea didn’t sit well with me. I only cared for the princesses who were more tomboy like myself such as Pocahontas and Mulan. While reading the Keyword essay on “tomboy” I realized that this was a good way to describe Kaya and also one of my favorite princesses, Pocahontas. 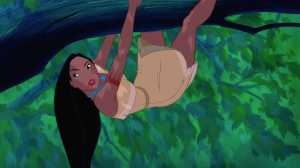 Throughout Kaya’s story she shows us that she does not fall into the stereotypical expectations of how a young lady should be acting held by the rest of her tribe. She is scorned by the other children and often only feels safe with her immediate family. Kaya’s tomboyness shines its brightest when she and the other prisoner boy (Two Hawks) have broken free from their captors and are trying to find their way home to Kaya’s tribe. The specific incidence of most prominence is when Kaya tells the boy to follow her to catch fish. She sees nothing wrong with this tomboy act and is only trying to help. Her tomboy ways are not met with gratitude and Two Hawks snaps back at her saying “Men lead and women follow. You follow me!” p.92. Kaya is only trying to help their situation. Her tomboy ways are what ultimately helped the pair survive on their own.

I felt that this was very similarly matched by Pocahontas. She was the rebellious and tomboy daughter of the powerful chief. She partook in many rough and tumble activities that were not what was expected of a princess. It also shows how people of the same ethnic group and somewhat similar social expectations could both be tomboys in a similar manner. As I tried to further refresh my memory of Pocahontas’s ways, I came across a list of the ten main Disney princesses in order from most tomboy to most girlie. I think this article did a great job describing what attributes made each girl fall into her place on the list. The author mirrored my feelings and opinions on why the tomboy who is Pocahontas is so great for all the things she does. Check out the link here.

2 thoughts on “Kaya and Pocahontas, Two Birds of a Feather”