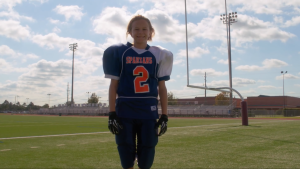 Often times when people think of the sport football, they think of masculine musclemen whose obsessions include weight rooms and protein shakes; and seldom do they ever consider girls or women to be equally capable football players as their male counterparts. This idea did not stop Peyton Watson, a young girl from Katy, Texas, from playing the traditionally male-dominated sport of football. Her interest and passion for football result in an image of a “tomboy”, which is shared by Jo March in Little Women.  The two together challenge the ideas of gender norms defined in the essays “Gender” and “Tomboy” in Keywords for Children’s Literature.

As Erica Hateley writes in her essay “Gender” in Keywords for Children’s Literature, boys are often presented as “movers, doers, explorers, adventurers, creatures of action” while girls are usually stereotyped as “subordinate to boys in initiative and daring, relatively docile, passive, emotional” (87). However, Peyton’s exuberance, athleticism, and love of
tackling and football are quick to assert her as an “mover” 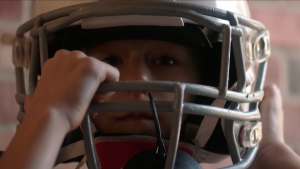 and a “creature of action”. Her eagerness and enthusiasm to participate in the sport despite being the only girl in her league only serve to reinforce that she is nothing short of being “initiative and daring” (video, 1:08). 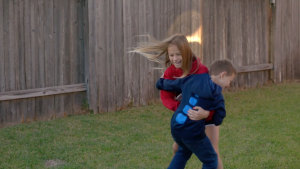 That being said, Peyton’s character and likings presents a tomboyish quality to her personality.  It is evident that she carries the “tomboyish bravery, daring, and autonomy” described by Michelle Ann Abate in her essay “Tomboy” in Keywords for Children’s Literature (222). Nonetheless, Peyton bears the burden of the expectation to act in a gender-normative way, which is shared by Jo in Little Women. In Little Women, even though Jo admits that she likes “boy’s games, and work, and manners”, her sister Meg urges her to “leave off the boyish tricks” (3). This reinforces the idea that girls are expected to be gentle and well-mannered, not active and high-spirited. While Peyton does not experience the same kind of pressure to forgo her tomboyish passions, she is often preconceived as weak and incapable by her peers until she steps on the field. Her teammate says, “you mainly think that a girl can’t be tough, then Peyton walks in” (video, 1:13). Her brother adds, “everybody would go, ‘this is a girl, it’s going to be easy’. A play later everyone goes ‘watch the girl’” (video, 1:20). While these comments are intended to be complimentary to Peyton, they, again, go to show how often girls are unfairly expected to be weaker compared to their male counterpart. Predetermining Peyton’s ability using stereotypes is as bad as depriving her of her expression of individuality. She has been expected to be “just another girl” until she eventually proves herself to be different. Anyway, it is evident from Little Women and Peyton’s story that gender expectations continue to be prevalent. And unless girls are given a chance to prove their individuality, these gender stereotypes are unlikely to cease perpetuating. 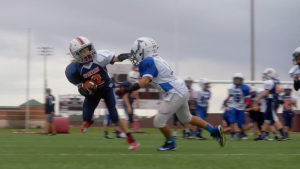 Maybe Peyton Watson is a tomboy, maybe she’s not. But really, why does it matter? These are just labels. What matters is that she didn’t fall victim to conformity; that she didn’t accept the gendered limitations society have perhaps made some young girls captives of. She is the epitome of a young girl who defies societal gender expectations. Maybe she’s a tomboy, or maybe she’s just Peyton Watson, an embodiment of genuine authenticity and individuality.