In Heather Wuebker’s article, “Domestic duties still largely ‘women’s work’” (in UCI News), we are exposed to the presence of traditional “gender-normative” domestic roles of women continuing to persist in 21st century American society. In her essay on “domestic” in Keywords for Children’s Literature, Claudia Nelson, discusses how the term “carries a connotation of the old-fashioned” in which middle-class females are expected to “[adjust] to home duties” when engaging in the act of marriage (67). This idea of prescribed domestic ideals to married women are similarly seen throughout the lives of the female characters in Louisa May Alcott’s 19th century novel Little Women. Wuebker’s article interestingly educates us about how times of gender imbalance and submissive female roles have not changed as much as people may think. 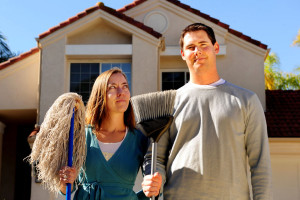 Similar to Little Women, Wuebker identifies that contemporary women often continue to exhibit traditional and expected ideas of their gender roles, but that these roles are also challenged at times, reflecting women’s search for independence and ways to disconnect themselves from these traditional expectations. Despite many pushes for gender equality in society, patterns of old-fashioned domestic duties and housework have been found to change only slightly. This shows us that the fight for women’s political equality does not always portray equality in marriage. The idea that this changing of gender roles is a slowly progressing movement makes me realize how Little Women continues to be a prominent novel in raising the frustration of women’s limited options in society. This article makes me wonder if marriage ideals of American society will ever evolve in such a way that we will be able to truly push past the ideological view of a woman’s “social responsibility” being that of housekeeping and childcare.

2 thoughts on “Gender Inequality- Still in the 21st Century?”