Period Shaming is a new topic in the world of feminism. Women are beginning to showcase their periods in order to make a statement regarding its normalcy. An article entitled “Runner who completed the London marathon during her period without a tampon says she did it to ‘break the stigma’ after receiving support- and criticism- for her actions” by Bianca London for MailOnline tells the story of Kiran Gandi, 26, a musician and Harvard graduate, who ran the London marathon last year while she was on her period. So what’s the point? We all take part in physical activities while on our periods, but Kiran did so without any form of sanitary product to contain the bleeding. Kiran says she did it for “sisters who don’t have tampons” and “to say, it (menstruation) does exist, and we overcome it every day.” She obviously received mixed responses from both men and women all over the world, some were supportive, and some lashed out. 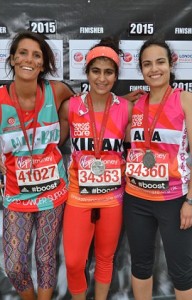 We see a very similar situation in The Bluest Eye. When Pecola gets her first period, it is a cause for confusion, fear, and an accusation of “nastiness” from Rosemary. “‘Mrs. MacTeer! Mrs. MacTeer!’ Rosemary hollered. ‘Frieda and Claudia are out here playing nasty! Mrs. MacTeer!’”(30). Frieda and Claudia do their best to help Pecola clean up. They think the best solution is to throw away her pants to hide the fact that she got her period. Mrs. MacTeer even beats Frieda before she has a clear understanding of what is going on. Girls are taught from early on that a period is something to be kept hidden. Girls hide tampons and pads in their backpacks, pockets, and sleeves every time they go to the bathroom during their period in fear that someone might see. They live in anxiety each month that they will bleed through their sanitary product and be an embarrassment at school.

In Keywords For Children’s Literature, we get a feeling that topics of period shaming and body shaming in general occur in many books categorized as children’s literature. Kelly Hager’s essay on the body states that “contemporary literary investigations into the Girl continue to envision girlhood according to tropes and plots familiar since the dawn of novelistic fiction….Physicality—the Girl’s experience of her body, engagement in or denial of sex, her cultural ‘value’ as young female body—remains crucial.” (19). We wonder why people show disgust for menstruation but then see shaming of it in all forms of media including literature. People makes jokes all the time connecting a girl’s frustration and anger with her period. We hear “Oh is it that time of the month again?” because a girl shows her feelings. In the essay on innocence by Marah Gubar in Keywords For Children’s Literature, she says, “books and films for adolescents often suggest that the advent of mature sexuality makes you a monster. In Brian de Palma’s 1976 film of Stephen King’s (1974), the teen heroine’s first period coincides with her sudden ability to use her mind as a weapon to murder and destroy.” (126) It’s time for girls and women to stop being okay with being made out to be monsters, or gross beings because of a naturally occurring process that our bodies undergo.