In the book Finding Freedom: A Classic Featuring Addy, we see the story of a girl and her mother who escaped slavery. This story shows the importance of education and demonstrates that the direction of knowledge exchange is not always from older to younger, as is seen in the picture at the bottom. Slavery was all Addy had known her whole life, so when she arrived in Philadelphia she felt a little out of place. Addy’s “momma” allowed Addy to attend school so that she could learn to read and write for the first time. Addy’s mother, also raised as a slave, did not know how to read or write either, so Addy began to teach her mother what she was taught in school each day. With these skills, Addy was able to read the addresses to which her mother needed to deliver the dresses she made. As a result, Addy became the delivery girl, helping her mother as well as Mrs. Ford. This situation relates to what Elisabeth Rose Gruner explains in her essay on “Education” in Keywords for Children’s Literature. She states that “education may be primarily vocational…or more holistic” and that “either view of education focuses ‘on the formation of individuals to the benefit of society'”. The fact that Addy learned to read directly affected her ability to help her mom by both teaching her mom and reading for her, bettering their place in society.

This direction of knowledge exchange, which is opposite the traditional older teaches younger pattern, seems strange to us although we do see something similar in our lives today. It is very common to see children teaching their parents how to use technology, something I have had first hand experience with through teaching my mom how to do things such as opening up the camera on her iPhone. A study conducted on 14 parent/child sets found that 40 percent of parents learn how to use technology from their children (Science Daily). This is a great example of the reversal in teaching roles that can occur when the younger generation learns something first, such as a former child slave learning to read or a modern day kid growing up around computers. 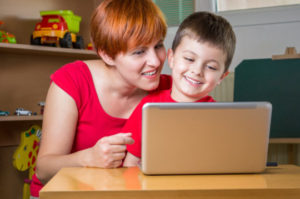