In 7th grade, I found out I was African American.

To make it more clear: I grew up in a town where diversity was just a mere sprinkle on a cupcake, so when I came to middle school, there were plenty more sprinkles to cover that cupcake.  In elementary school, it rarely was addressed that my dad was African American because to the school board, they saw him as just another district dad.  We were just a family in our district that had two (visible) people of color.  In middle school, it was different. For example, one day in class, I remember an African American boy ask me if I was white or “black like my sister.”  It was then that I began to see that there wasn’t a stigma to being “half” until I was exposed  to my own culture.  In a way, I’m reminded of the stories in The Bluest Eye by Toni Morrison based on the relationship toward beauty in a black or blacker world.

Monica Holland, junior dance major at the UW Madison, recently performed in a project called “Hair Stories: Exploring Identity Through Movement and Voice.”  The showcase was a means of demonstrating how our hair is deeply connected to how we view ourselves and how the world views us.  In the performance, Monica showed us what her hair meant for herself.  Through dance and spoken word, she addressed that she wanted to look like her other friends by straightening her naturally curly hair.  Yet, at the same time, she faced constant questions to wearing her hair natural.  Meanwhile, the other dancers acknowledged comments begging them never to cut their hair, and thus, realizing what those dead hair cells meant to their appearance.  In the dramatic finale, the star of the show partook in a live action haircut right on stage. 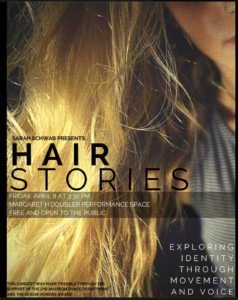 Hair defines a girl in many ways, but it also defines a black girl in many ways too.  One time, I was at a store with my mom, and the salesman gave one look at my thick, curly and unruly hair and asked if I was black.  After this encounter, my mom told me that people can tell their own race through each other’s hair. As I began to notice and appreciate my hair more, details soon began to make more sense. Details like why  my grandma is no longer allowed to fix my hair with her ruthless “kink free” hair products; or why I am my hairdresser’s favorite client to wash and style hair.  But most importantly, it explained why my dad would get mad at my sister and I for constantly wanting to straighten our hair to look like our white friends.

With celebrities like Kerry Washington, Naomi Campbell, and more, I’ve noticed another African American feature, full lips.  Though my mom disagrees and says that my lips aren’t as prominent, I find myself watching them in mirrors, excessively.  To me, I’ve always found my lower lip as a little more fatter than my top.  I’ve tried sucking it in, but I soon realized I could not hold it in forever. Last year in my high school’s show choir, a girl (the one underclassmen who had no filter, conveniently) came up to me and told me that I had “big lips.”  Thus, the obsessing over my lips continued.

I still find it hard to find my race in the real world because it is often classified as either/or.  A popular example are the personal information boxes on forms that disallow me from choosing more than one race in the box labeled “check the race you identify with.” I’ve also learned I mostly had white friend groups, but if I were to have friend groups of another race then it would be exclusively just that race.  Even though I didn’t like being exclusive, I could never figure out how to combine both friend groups successfully.  I consider myself as being multicultural in that I love being both races equally, and I would appreciate if people were made aware of how non multicultural their actions-hierarchizing the “n” word in rap lyrics or other forms of “trying to act black”- truly are.

In regards to the multicultural versus racism argument, there is a theme of tolerance.  I find myself in a constant state of tolerance. Tolerance, in my self consciousness about my appearance or about how others view me, never goes away.  Yet, in a world that says “prove it” to other races, I still seek to find the beauty that a mixed girl like me deserves.