When we think of dresses, bows, and the color pink, girls come straight to mind. In Keywords for Children’s Literature, Jacqueline Reid-Walsh says, “‘The doll is the special plaything of the sex. Here the girl’s liking is plainly directed towards her lifework. For her the art of pleasing finds its physical expression in dress…’” (p. 93) in her essay on “girlhood.” She discusses one of girlhood’s root meanings being dress or apparel showing girls’ connection to frivolous appearances and superficiality. Girls have been historically represented as inferior to boys and having less active interests and hobbies, such as playing with dolls.

In Little Women by Louisa May Alcott, society at this time taught that women needed to get married in order to support themselves. Men were responsible for providing for the family and women were responsible for taking care of the domestic space and the children. The March girls, besides for Beth due to her passing, all conform to this standard and end up getting married. As Jo says, “‘If I was a boy, we’d run away together, and have a capital time; but as I’m a miserable girl, I must be proper, and stop at home’” (p. 213). This quote shows how girls felt very restricted and limited during the time of this novel. They were not free to do everything and did not have the same opportunities as boys.

The most recent video created for Always’ #LikeAGirl ad campaign, entitled Girl Emojis, has girls discussing the way they feel emojis represent them. There are only stereotypical images of girls featured and male characters are used to portray most activities. One girl says, “Girls love emojis but there aren’t enough emojis to say what girls do. That’s just how things are.” 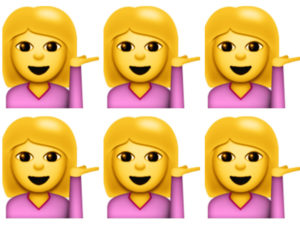 The video goes on to show the girls describing the type of emojis that they would like to see. Some that are mentioned include a female wrestler, soccer player, cop, lawyer, detective, and musician. The video drives home the message that girls are capable of achieving whatever they set their mind to. Although the stereotypes of girls being limited to certain activities as shown in Little Women do exist in emojis, society has made much progress. Women today are able to have any profession and are not dependent on marriage for financial support. The emojis need to catch up with what really exists in the world and portray the strong, independent women that are today’s reality.

7 thoughts on “Where are the Empowering Emojis?”