Most, if not all of us grew up watching Disney movies, particularly those featuring the classic, unrealistically beautiful, highly dependent princess. Though recent characters have begun to vaguely resemble human proportions, the Disney princesses remain well known for their physically impossible figures. Along with Disney’s consistent use of this unattainable body, the villains in the movies are frequently more full figured. Take the movie The Little Mermaid for example. The protagonist Ariel fits perfectly into the Disney “ideal”, while the antagonist Ursula is illustrated to appear over-weight. 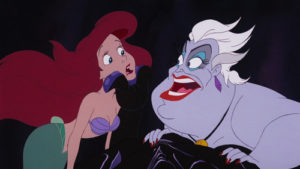 This demonization of full-figured women is not at all uncommon. We all have the obvious experiences with slender models and movie stars being portrayed as the norm, but even well respected books such as The Bluest Eye touch on this bias. The two sisters in The Bluest Eye have been taught to associate weight gain with being “ruined” through the ridicule of the prostitute The Maginot Line. In Kelly Hager’s Keywords essay Body she states that “promiscuous sexual activity, criticized and vilified is linked to a character’s weight” (21). This is evident in The Bluest Eye when one sister recommends that the other exercise and not eat to avoid the dreaded weight gain that is presumed to follow the participation (non-consensual in this case) in sexual activity.

The continued shaming of the female form is detrimental to women of all shapes and sizes and the blatant biases of mass corporations, such as Disney, are plaguing the minds of girls barely old enough to attend elementary school. It is important that an effort is made to make images of women, whether animated, photographed, or written, appear realistic. No body, no matter the size or shape, is a “bad” body. You are beautiful.

8 thoughts on “The Detriment of Disney”