Beyonce’s latest record, accompanied by a full length visual album, though buzzed about for its hints at a cheating scandal, was also brimming with notions of race, class, gender and inequality. Most clearly linked to our course’s discussion of American Girlhood was the inclusion of the Malcolm X quote: “The most disrespected person in America is the black woman. The most unprotected person in America is the black woman (See video above)”. Beyonce’s messages with this quote, along with other references in the album such as the following line from the song Formation: “I like my baby heir with baby hair and afros; I like my negro nose with Jackson Five nostrils” are a clear pushback against normalized white supremacist notions of beauty which are central to Toni Morrison’s The Bluest Eye.

In her essay from Keywords for Children’s Literature on “Race”, Katharine Capshaw Smith quotes Langston Hughes discussing depictions of black children by white authors as historically “of the pickaninny variety, poking fun (however innocently) at the little youngsters whose skins are not white, and holding up to laughter the symbol of the watermelon and the chicken” (191). In Lemonade, Beyonce pushes back against this depiction by featuring strong, powerful black girls and women, as seen below. 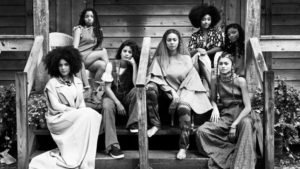 In a post on Revelist, Allanah Dykes discusses the ways in which Lemonade has emboldened her, in the same way that the writing of Toni Morrison has. Similar to the character of Claudia in The Bluest Eye, Beyonce pushes against the notion that American beauty is exclusively white, blond-haired and blue-eyed. Dykes writes that Lemonade, along with the writings of Patricia Hill Collins, Chimamanda Ngozi Adichie, and Morrison “finally made me realize that I had the power to break the cycle of shame.”

As such, Beyonce’s Lemonade contributes to a growing body of work, of which Morrison is a pioneer, which is working to expand the American representation of what is “beautiful”.

6 thoughts on “Race, gender and beauty in Beyonce’s “Lemonade””