People today, especially young girls, are pressured to look a certain way in which society considers beautiful, creating an array of negative body images and insecurities. In Kelly Hager’s Keywords for Children’s Literature essay on “Body”, Hager touches on this issue stating that “mass culture circulates bodies promiscuously; its technologies and commercial logic ensure the production of desirable body images made available to the widest market (21).” She also exemplifies how in literature it is a common theme to see that “heavy characters are all represented as sexually promiscuous, passive and powerless, while thin characters appear responsible and powerful (21).” Constant negative depictions of “fat” characters give off the impression that only thin people are desirable. This reminded me of Toni Morrison’s The Bluest Eye. In this story we see Claudia and Frieda discussing that being “big and fat” would make them “ruined” in society’s eyes. Another example of body image in this story is Pecola’s obsession with having the bluest eyes. To her, the only way she will consider herself beautiful is by having “the blue eyes of a little white girl (204).”

The idea of having society’s perfect body is often seen in modern television shows and movies. For example, in the TV show “Friends” there is a running joke throughout the series about how Monica used to be extremely overweight. In the episode “The One with the Nap Partners”, we find out that Chandler, who is now engaged to Monica, had previously broken up with a girl from summer camp once she “got fat.” Knowing how degrading that feels, Monica forces Chandler to go find this woman, who is now thin and beautiful, and apologize to her. This demonstrates how many girls are taught to think that no one will find them attractive if they are not thin.

Many girls today try to conform to the social norms of beauty by trying to look like the thin “beautiful” girls shown in magazines and on television. This expectation on beauty creates a negative body image for many girls, which can cause them to become very insecure and have trouble seeing themselves as beautiful. If more realistic body images were more publicly portrayed in media, perhaps there would be a less judgmental fixation towards the female body in pop culture. 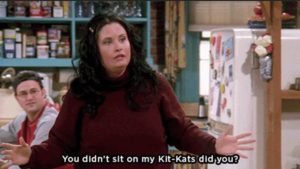 14 thoughts on “The One with the Negative Body Image”