Like many of the American Girl doll time periods, todays standards for these social standards are developed during girlhood. This article on Upworthy tells a story about a father coaching his daughters all girls t-ball team, the only girl’s team in the league. As a loving and supportive father, initially he believed the best way to coach was somewhat gender specific, he called the sweetie and honey, discussing whether or not they cared about how they looked and he was surprised by their responses. These young girls pushed against the gendered norms his father was expecting and showed great strength and resilience as children, despite their gender. When a loving father was unaware of his own gender stereotypes for these young girls in sports, it is easy to conclude that a majority of society has them as well.

In the American Girl books we have read so far this year, the girls have all established that being active, adventurous and competitive are out of the ordinary activities for girls. Whether Kaya is racing horses in the forest or Kit trying to do some hard-core journalism, these are stories of girls pushing the boundaries of gender norms already set in place by society. While the American Girl catalog now includes sports equipment, uniforms and other objects indicating the societal acceptance of girls playing sports in present day, it seems that it is limited to a certain time period in a female’s life. 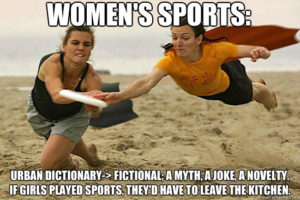 Grown women in the world of sports publicly face various ethical issues like sportsmanship, professionalism, sexuality, pay scale, work-life balance, weight and body image. A female athletes ability to be a mother (or her choice not to be one), not be “bitchy” and her physical abilities are consistently torn apart and nitpicked. In addition to athletes, women sports castors are also objectified, and bullied. The video below is of grown men reading to female sports castors terrible things that were written about them online. REAL HUMAN BEINGS ARE SAYING THESE THINGS TO OTHER REAL HUMAN BEINGS. We do not want our young boys to grow up and think it is acceptable to treat women like that, especially when they are in a male dominated field to begin with. It is crucial to teach not only our young girls but also our young boys about what is wrong with this video. Apparently it is also important to teach adult men about gender oppression within the realm of sports.

8 thoughts on “Gender in Sports”