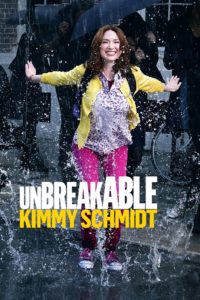 For those who are unfamiliar with the sensational Netflix series Unbreakable Kimmy Schmidt, the show is about a 29-year-old Indianan woman Kimmy Schmidt’s soul-searching adventure in New York City following her rescue from a doomsday cult bunker she was kept captive for 15 years. As we follow Schmidt’s story,we learn that she lacks knowledge of basic, fundamental life skills normally associated with womanhood. While we have spent the majority of the semester examining the idea of childhood, we have only mostly challenged the notion by discussing the ways in which preciousness among young children enables manifestations of traits normally associated with womanhood. Rarely do we ever discuss the ways in which innocence and ignorance could reverse the situation. This begs the question: Does Kimmy Schmidt’s ignorance of the outside world make her a girl? Or, does her independence and the hardship she endures in the bunker validate her identity as a woman?

According to the essay “Childhood” by Karen Sánchez-Eppler in Keywords for Children’s Literature, the meaning of childhood is “widely recognized as a life stage that stretches from birth until the taking on of adult competence and responsibility”, and for that reason, it is often “deeply circumstantial” (36). From the show, we see that Schmidt often behaves in ways that are “child-like”— her

inability to tie her shoelaces, her obsession with silly-bands, her inexperience in romantic relationships, her resistance against the use of foul language, her naïve optimism, her oblivion towards the norms and culture surrounding, etc. Yet, despite her occasional childish behavior, she also proves herself to be a complex, paradoxical character by showcasing her mental toughness, resilience and independence. Among the women (girls?) who were kidnapped, she has always played the role of a “mother”. She has always been the trustworthy go-to for problem-solving and advice, both during her days in the bunker and following her

survival. One may even argue that the hardship she endured in the bunker and her ability to sympathize and to relate to struggles of others make her insightful and wise beyond her years; it makes her a woman. So, in some ways, Schmidt is able to live up to the “adult competence and responsibility” that is normality expected of women, but other times she isn’t able to. This paradoxical notion of girlhood can also be observed in Annie (1982), where the orphan Annie is portrayed as a quasi-motherly character who is more mature than her peers. Nonetheless, an angelic image that is normally associated with young girls becomes readily evident during her time with Mr. Warbuck.

9 thoughts on “Kimmy Schmidt: A Woman or a Girl?”