In Toni Morrison’s, “The Bluest Eye” it is clear throughout “whiteness” is being associated with beauty, purity, happiness, and innocence within the book. This theme of whiteness allows us to discuss the term race, and how the differences amongst the races is the main source of tension, and worry within the novel. Looking into our Keywords from Children’s Literature, we read Katharine Capshaw Smith explain how, “representations of “race” often reflect history’s problematic racialist thinking.” Based in 1940’s, we see this problematic racial thinking Smith talks about when Cholly is humiliated by two white men while he is losing his virginity. Instead of focusing his anger on the two white men who caused this humiliating moment for Cholly, he directs his anger towards women. This example of how race has effected Cholly is just one of many example that could be pulled from the book. For just about every character in the book, there is a moment or moments of negativity in their lives caused by racist thoughts.

Messages that whiteness is superior are everywhere, white baby dolls given to Claudia, light-skinned Maureen being cuter than the other darker girls, Mrs. Breedlove sharing that Pecola is ugly and Geraldine cursing Pecolas blackness. Pecola suffers the most from these white standards of beauty, and while it is almost 80 years later in time some African Americans still suffer from these idolized white standards of beauty. 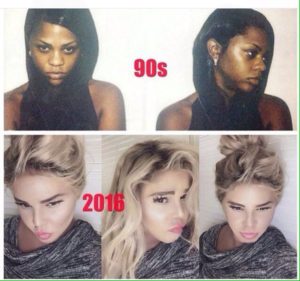 Recently there has been a lot of controversy revolving around Lil’ Kim, and rumors about her taking part in skin bleaching. In an article Lil’ Kim states that in her opinion, being black just isn’t beautiful. It’s unfortunate that celebrity figures like Lil’ Kim are putting out negative opinions about having African American skin. While she is entitled to an opinion, I feel as though this is a large step back for African Americans in their fight to promote African American beauty standards.