10,000 people every month Google the phrase, “Am I ugly?”   Meaghan Ramsey introduced this statistic in her Ted Talk, “Why thinking you’re ugly is bad for you.” She discusses similarly how children have posted YouTube videos asking viewers, “am I ugly or pretty?” 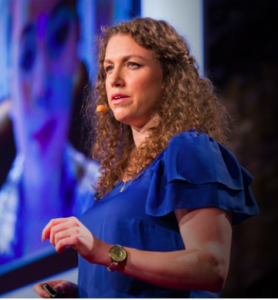 Viewers responded with harsh and negative comments on the videos. She explains that constant interaction with social media creates no separation from online and offline life. Appearance becomes a girl’s main focus, and mental health suffers as a result.

Toni Morrison’s, The Bluest Eye presents Pecola’s excessive obsession with beauty, which she links to having blue eyes.   Pecola discusses her blue eyes with her imaginary friend saying, “But suppose. Suppose a long way off. In Cincinnati, say, there is somebody whose eyes are bluer than mine? Suppose there are two people with bluer eyes? So what? You asked for blue eyes. You got blue eyes. He should have made them bluer (202-203).” Though Pecola got what she asked for, she still is not pleased with herself. Attaining her idea of beauty comes with losing her sanity. Her blue eyes blind her from the world and she becomes further isolated from others. She thrives off of constant reassurance and has clearly not escaped her demons deep within her.

In Karen Coats’ Keywords for Children’s Literature essay on “identity” she explains that, “identity has become more of an outward show seeking recognition and uptake (110).” How we view and identify with ourselves has become based on what others think and their recognition.  Ramsey explains that the same happens with girls as they are constantly fixated on their appearance, beauty and apparel which help them to achieve appreciation and identification from others. They put on a display that gets them recognized. Pecola has simultaneously done the same and consequentially her sanity and mental health suffers. Ramsey sums up this issue perfectly saying, “our culture’s obsession with image is holding us all back,” just as Pecola was also held back and captivated by the idea of beauty and attaining blue eyes. It’s important for young girls and women to remember that the way you look is just one part of your identity.