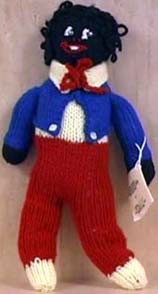 In The Archive of Childhood, Part 2: The Golliwog and the “present day television cartoon compilation” focuses on the representation of racism in children’s literature with underlying suggestions of scripting. The Keyword Race, written by Katharine Capshaw Smith defines race as “a means of grouping individuals by ethnic, social, or national background” (189). She talks about how race is a social construct and creates communities that share history, culture and political goods. Though this may be true, The Archive of Childhood, Part 2: The Golliwog doesn’t mention this positive aspect of race whatsoever. Before taking this class, I didn’t know that it was common for racism to be represented in children’s literature and media. For example, De Tar Baby, Cat in the Hat, Mickey Mouse and Bugs Bunny. But as Nel mentioned throughout his entire post, he referred to the Golliwog as “thing”, not a friend, gender indeterminate, humanity-less, distant, c

reepy and grotesque, but never as “Black” until reaching adulthood. Philip Nel, the author of the Golliwog blog post mentions: “that [the way in which he] saw this racist doll [as a child] as unconnected to race or even human being specifically is telling. It’s a great example of how racial ideologies can hide in plain sight, but it also offers some insight into what children see or don’t see”. This real life scenario proves that racism in children’s literature commonly hides in plain sight. As Smith says “race in literature for children, women writers often used children’s texts as a means to resist the patriarchal restrictions of race movements, and to reshape he race by resisting sexism as well as racism” (192). Similarly, in the present day television cartoon compilation characters who were portrayed as mischievous, violent, or overweight were Black. I grew up in a racially mixed household and would watch cartoons with my brother on Saturday mornings, but these images never crossed my mind as racist! This surprises me not only because it’s in plain sight, but also how cute and “light-hearted” cartoons are priming our brains to think a certain way! Lastly, both The Archive of Childhood, Part 2: The Golliwog and the present day television cartoon compilation suggest different ways of scripting. The Golliwog was soft and therefore scripted cuddling, and the comics are funny and script repetition and therefore racism and possibly prejudice. My questions for you: how do you think the critics would have responded if cartoons left out the representation of black characters all together? Positive? Negative? Second, did any of you notice racism in these shows growing up? If so, what did you think? Did it start a conversation?

1 thought on “Underlying Yet Screaming in Our Faces”