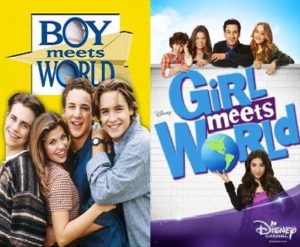 Disney recently developed a sequel of Boy Meets World, called Girl Meets World. This sequel follows the lives of Riley Matthews, the daughter of Corey and Topanga Matthews from the original show, and her friends. Boy Meets World was one of my favorite shows as a 90’s kid, so I decided to check out the new show. Overall the show doesn’t live up to its original, but it definitely has some great lessons that young girls could connect with. One of the episodes that stuck out to me the most was called “Girl Meets STEM”. In this episode, the lab partners are to divide up work and in each group the boy tells the girl to do the easier part of the project that requires no thought and the boys can do the science. Riley quickly notices this disparity and stands up for herself and the rest of the girls. When I watched this episode I thought of this class because we have spent a lot of time talking about gender roles and equality. In the end it turns out the experiment is actually a social experiment designed to show that the partners must work as equals and explains that STEM subjects are important for all students, not just the boys.

After thinking about this lesson in the context of our class it made me think of the keyword Identity. This keyword points out that “identity structures are validated and affirmed” by seeing them in books (Keywords 111). With all of our current technology, I believe that this idea extends to other forms of media as well, such as movies and music. In this show influences from their environment had shown both girls and boys that boys were the ones who should do the science. The girls initially accepted this gender identity because it was a social norm that they had previously conformed to because that is what they had been exposed to. As for the viewer, this show teaches an important lesson for both genders, while providing an opportunity for young girls to connect with characters who stand up for themselves and who have a more individualistic view of their identities than most media. The idea of promoting an individualistic identity rather than blending in is also seen in the Annie movies. Annie is a self-confident, spunky orphan kid, who sticks out from others. This is a similar positive role model in the fact that she promotes defining your own identity rather than letting society decide it for you.