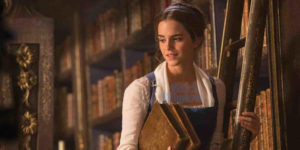 In thinking about modern American stereotypes about girlhood and gender roles, one obvious source of these ideas in our culture today is Disney and its princesses. Historically, many of the princesses like Cinderella and Snow White exhibited behaviors that helped define femininity: a dutiful and obedient manner, dependence on men, and, of course, beauty. However, modern adaptations of traditional princesses’ stories are challenging these established ideas about girlhood, as seen in the 2017 live-action remake of the movie Beauty and the Beast starring Emma Watson. I would like to explore the way traditional narratives like Little House on the Prairie use the concept of girlhood to mean obedience and subordination, while the new Beauty and the Beast uses girlhood to show empowerment and intelligence.

In the text of Little House on the Prairie that we read this semester, Laura’s girlhood was defined by obedience to her parents and learning feminine virtues, such as cooking, cleaning, and being selfless and moral—a “good girl”, in the words of Ma. This is a very classic interpretation of girlhood, one that earlier Disney princess stories mirrored closely. Now, in the newest version of Beauty and the Beast, Belle has undergone a few changes that reflect changing ideas about girlhood. For example, in this reincarnation of the classic tale, Belle is not just an assistant to her father the inventor—she actually creates machines herself. Further, the new and improved Belle will not wear a corset, which creates a less perfect and classically feminine physical appearance. In summary, the modifications to Beauty and the Beast offer a more modern perspective on girlhood, in which girls are not always obedient, dependent, and physically perfect, but instead can take charge and be valued for their intelligence. These ideas bring new interpretations to the meaning of “girlhood” in literature, film and popular culture.