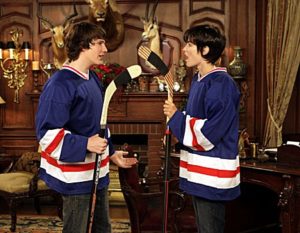 In the comedy television series, How I Met Your Mother, there are a lot of instances where women are sexualized, portrayed as objects, and fit the mold of a stereotypical girl. However, two of the characters in the show challenge the gender norms we have seen throughout history. In Little House on the Prairie, “girlhood” is portrayed as feminine and domestic, but in How I Met Your Mother, “girlhood” isn’t tied to a single/feminine definition– it’s just however a girl was raised.

First of all, one of the characters, Ted, is a hopeless romantic who is constantly looking for “the one” and actively searching for a long-term serious relationship. In today’s modern view of men, some might call him “soft” or “feminine” for constantly longing for emotional investments. Robin, on the other hand, is a career-driven, independent woman who is not looking for any long-term or emotional commitments. These traits challenge the common characteristics of girlhood as we know them today. For example, in Little House on the Prairie, Laura’s main goal in life is to grow up, get married, and have a family. It’s expected of her to do so as a woman in her culture. Robin’s goal is exactly the opposite; she has no intention to get married, have kids, or settle down.

There’s another part of “girlhood” that is challenged significantly with Robin’s character, and it’s the activities and appearance commonly associated with girlhood. Robin always talks about her girlhood growing up in Canada with her father. He always wanted a son, so he would take Robin hunting and fishing and do activities with her that are described as “boy-like.” In contrast, in Little House on the Prairie, Laura and her sister were always playing with dolls. Robin also played hockey as a child and spoke of her times fighting with guys on the ice—obviously different than playing with dolls, playing house, doing dance or cheerleading, etc. Last, there is an episode that shows her as a young girl wearing long shorts, a baggy t-shirt and sporting a short haircut. It also shows Robin greeting her father with a handshake instead of a hug while saying, “Hello, Sir.” This scene alone depicts more of a “boyhood” than a “girlhood.” In comparison, Laura Ingalls Wilder always wore a dress. With that being said, Robin’s character not only challenges the “life goal” aspect of gender norms, but it also defies the appearance and activity stereotypes associated with being a girl, especially these associated with Laura’s character in Little House on the Prairie.