On a normal night of binge-watching Netflix, it’s common to find me watching my favorite show, “The Office”. And when I mean binge, I really mean binge (currently on my 6th time watching this show through). From this class and my other social work classes that I have taken in the past year, the subject of gender and gender norms has been a huge topic of discussion. The more our society grows away from the typical gender norms that, say, our grandparents experienced, the more I can point them out when they are visible. After watching a show for a 6th time with the knowledge I now have, I have been noticing more gender microaggressions than I did the first 5 other times.

I guess the only reason as to why I am just now noticing all of this has to due with the fact that I started watching “The Office” when I was in high school and my guy friends used the same kind of jokes as Michael Scott did. The classic one-liner “That’s what she said” has probably been used in almost every episode of “The Office”, and was a classic joke said by teenage boys. Not only did I realize that phrase was said so often in front of me and my other girl friends growing up, but that we weren’t affected by it. At the time, I wasn’t really sure how to act when I heard that phrase so I just went along with them and laughed it off like everyone else. Now that I’m a little older and realize what it actually being said, the more the phrase rubs me the wrong way. 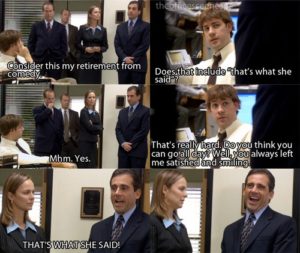 In an episode from season 2, airing in 2005, the office had to go through a review of the company’s sexual harassment policies after Michael’s jokes had been taken to another level and he had seen no harm in what he had been saying. The women in the office had finally had enough with his rude comments that targeted females and their stereotyped sexual behaviors. But as the episodes and seasons progressed, the more the phrase was said and the less the female characters reacted. In society today, we can see the same things happening.

When these microaggressions are first recognized, they are easily addressed and the behavior is changed, but only for a short while. Like in “The Office”, the next couple episodes were absent of Michael’s famous phrase. But as time goes on and the affected parties don’t seem like they have a problem with it anymore, the micro aggressions continue. Women get to the point where the gender stereotyping just “doesn’t bother them anymore”, even though most of the common phrases are hurtful and degrading to women. Recently, I’ve learned to point out these stereotypes against gender roles and the surround us more than we think. As I come across them more and more, I think about the typical gender roles that we have seen in past decades, and how they have changed. As our society grows out of norms, the more these comments and phrases are viewed as unacceptable to say.

6 thoughts on “Gender Norms and “The Office””