Laura and Mary from Little House on the Prairie and Eleven from Stranger Things focus on representations of “gender” in clothing, activities, and mannerism within their actions throughout their book or show. These separate characters and pieces of entertainment are aimed at separate audiences but reflect the same themes and lessons in different ways. Little House on the Prairie is aimed more at the younger children who are learning from their family and their peers what it means to be a girl, while Stranger Things is aimed at an older audience who can handle a little bit of fear and understand what the ‘typical’ girl looks like.

Little House on the Prairie shows the meaning of gender through Laura and Mary’s mannerism and activities. These activities include taking care of their little sister, washing clothes and dishes, and setting up the house for them to live in. These actions follow in society’s idea that women or girls should be the caretakers for children and clean around the house. Many young children, mainly girls, read this book and pick up the subtle ques of gender roles laid out within its pages. Stranger Things mainly focuses on clothing and looks to distinguish Eleven, one of the main characters, as a girl. In the beginning, Eleven is seen with short hair in a yellow t-shirt and multiple characters view her as a boy or boy-like causing the viewer to question her gender until we hear her voice. Later, throughout the show, Eleven’s guy friends bring her to school and to make her look more “normal”, they put a blond curly wig and a pink dress on her. Although the show conforms to societal thoughts about clothing, it does not conform to society’s view on mannerism and how a girl should act in public. In many scenes throughout Stranger Things Eleven becomes the protector and is much wiser than the boys within the show. This portrayal is much different than society’s ‘males are the stronger, more dominate species’ outlook. These forms of entertainment, although aimed at a different age groups, show the everyday ways in which a society portrays gender and how children and adults to this day still are learning about an ways to challenge gender and gender stereotypes. 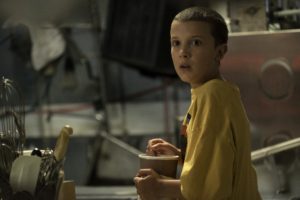 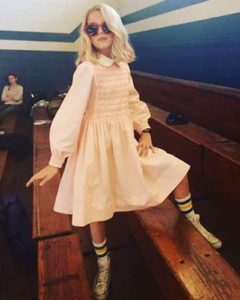