American Girl just rolled out their first ever boy doll this week. He came out with his songwriting friend Tenney. Before 2017 American Girl did not have a boy doll. Little boys were completely ignored in this market. I came upon a Buzzfeed article where one little boy wanted his own American “Boy” doll so badly that his mom completely transformed one for him. The mom cut the doll’s hair, removed it’s make-up, and bought it Spiderman themed clothes just so her son could have a doll that looked like him. This mom is definitely not the only one to transform dolls. Mothers have been working hard to create male dolls.

Now Logan may be a boy doll but he is still only marketed towards girls. The website writes “Tenney and Logan challenge each other to grow as musicians, and their partnership teaches girls the importance of being open to collaboration and compromise”. The website explicitly writes “teaches girls” meaning this brand new boy doll still really isn’t meant for boys. Dolls are generally considered a “girl” toy. However these ideas of “girl” and “boy” with gender are definitely just a social construct. In Keywords for Children’s Literature Gender is said to “allow or disallow certain behaviors or experiences on the basis of biological sex”. This is clearly seen in the doll industry. Girls are expected to play with dolls and stuffed animals while boys are expected to play with cars, legos, and video games. Boys are often looked at strangely if they play with dolls.

Dolls have been seen in many of the texts we have read so far. There is a major connection of the female gender and allowing and expecting girls to play with dolls. Kirsten, Kaya, Josefina, and Mountain Wolf Woman all had some sort of doll they played with. All of the girls we have learned about have had dolls to play with because they have been socialized into this idea of female and what they are supposed to play with. However they are all just kids and this social construct of gender is keeping young kids upset. Little boys want to play with dolls too and only now in 2017 has American Girl released a boy doll, which is really still meant for little girls to play with. 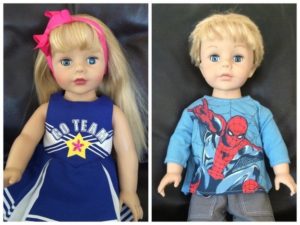 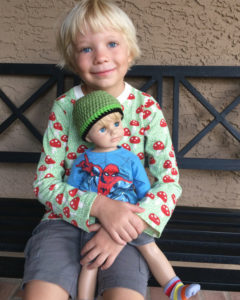 The little boy and his new look alike doll.