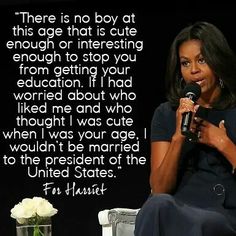 This quote from Michelle Obama is one that I came across in one of her speeches that later flourished throughout social media. I believe it sends a very powerful message to girls and what their education should be comprised of as well as what they should be focused on. The two keywords I would focus on from this quote would be gender and education and how they relate together. Gender and education are both described in the same way in the book and in the quote. Education is thought of in the same classroom setting and gender is described as how each boy or girl acts and behaves. What interests me is how girls and boys are perceived to act in younger years such as elementary school. It seems as almost an innate behavior at that age to be a girl consumed by a crush of a boy. Personally, my friends and I would pass notes all class period usually gossiping about a boy we liked and if they would talk to us today or if they might like us. For this fact, I absolutely love what Michelle Obama is saying. I think it is important to teach these young girls that no boy is worthy of taking away your attention or devotion to education. While we haven’t really seen yet too many crushes between a boy and a girl in our readings I think it is something that is definitely prevalent in girlhood.