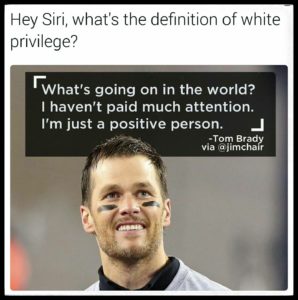 I found this meme randomly on Facebook one day, and knew I needed to use it for my keywords blog. The last couple books we have read, like Little House on the Prairie and Kirsten Learns a Lesson, white supremacy and white privilege have kept coming up. We obviously haven’t had the keyword white supremacy, so I had to think where that would fit in with the ones we have had so far. I decided that white supremacy and white privilege would best go along with the keyword “America” because of the words that tie into the idea of America. For example, we thought “America” was described as morality and virtue, a political space, and “American” values and culture. We also thought someone described as “American” has specific language, culture, and identification. I think the idea of football or a football player, like in this meme, and the white privilege way of thinking can really be contributed to all those examples in some way.

In the “America” keyword blog it mentions how America is symbolized by baseball, hot dogs, apple pie, and Chevrolet,” but I would argue football and Ford are better representatives of the nation’s essence! This picture seems to show what the attitudes of most people in America sound like lately; they don’t really care what’s happening in the world and only about themselves. ““Americanization” came to signify the degree to which those immigrants altered their customs and values in accordance with the dominant view of Americanness at the time.” This statement was also in the “America” keywords essay by Kirsten Silva Gruesz. It makes me think of how some people just go along with the white supremacy/ privilege idea because everyone else is. Maybe they don’t think that way, but they aren’t doing anything to show that they aren’t or stop others from thinking that way. Like Pa when talking to Mr. Edwards and Mr. Scott in Little House on the Prairie. The two men were very racist and prejudice against the Indians, and Pa didn’t seem quite as against them, but he also didn’t do anything to defend the Indians or change the other men’s minds about them.

It seems the new controversies and issues going on in the world right now like the new presidency, the refugees crisis, and the random attacks on countries are everyone else’s problem, but theirs and doesn’t affect them at all. Exactly how Tom Brady is portrayed to think in this picture.