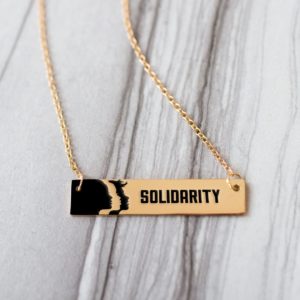 January 21, 2017 will forever be remembered as truly a day of solidarity. All “Nasty Women” united and marched on Washington. Many people gathered to raise their voices for many issues regarding women’s rights and much more. Various pieces of clothing and jewelry have been created for the Women’s March, especially to continue to celebrate the cause. In Keywords for Children’s Literature, Gender is represented by performativity, or how a person uses speech and communication not only to communicate but instead to act or to construct and perform an identity; while on www.pipercleo.com, gender is represented through the jewelry to empower women in a way that shows performativity.

In Keywords, the authors state, “Gender in and of itself is rarely the object of critique. Rather, specific constructions of gender structure understandings of subjectivity; allow or disallow certain behaviors or experiences on the basis of biological sex; and dictate a specific vision of social relations and organization” (86) which I believe is an accurate representation of the Piper Cleo website. This website gives women the chance to actively communicate the message of gender and perform their identity. The best part about this website, for every product sold Piper Cleo will donate to an organization empowering women.

Personally, I believe it is incredibly sickening and upsetting that after everything women have gone through in our history, we are rewinding and losing what we fought so hard for. From 1918 to 1920, a few of the most important events in women’s history occurred as the suffragettes fought long and hard to receive the rights they deserved. Now, in 2017, we are today’s suffragettes. We might not go on hunger strikes or go as extensively as the original suffragettes, but as one of the solidarity bars states, we are “Stronger Together.” I believe this website shows that women hold this cause very close to their hearts, and will support this empowering movement by communicating the cause through wearing these solidarity bars.

I am proud to say I purchased my own solidarity bar. Keywords states, “Early nineteenth-century ideologies of “separate spheres” and “biology as destiny” children’s texts presented boys in fiction as movers, doers, explorers, adventurers, creatures of action, guile, mischief, intellect, and leadership. It presented girls as tag-alongs, subordinate to boys in initiative and daring, relatively docile, passive, emotional, and unimaginative; as restraining influences on male daring and excess; as objects of an ambivalent male adulation and contempt; as domestic souls in training to be housewives and mothers’” (89).

Well the early nineteenth century obviously did not know that the FUTURE IS FEMALE.