Businesses across US close, students skip school on ‘Day Without Immigrants‘ 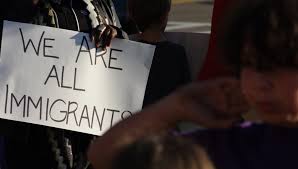 Land of the free, home of brave.  The Great Melting Pot. Land of Opportunity.  These are all terms that represent our dear country of America. So in such an opportune and fortune filled land, a nation of Immigrants, why do people still have to fight for the right to live here?  It comes down to the fact that some members in society consider themselves more “American” than others.  So what makes somebody American?  Is it the color of their skin, their career, income, ancestry, home land, or citizenship status?

These are all questions that Kirsten Silva Gruesz addresses in her Keywords article titled “America.”  In the essay, Gruesz makes the statement that “using the term [America] in conversation or debate tends to reinforce certain ways of thinking while repressing others.”  The views that is reinforces, are evident even in children’s books.  In “Little House on the Prairie” little Laura Ingalls sees herself and her family as superior to the Native Americans, because the Ingalls had American values, were white, and lived in a more “civilized” manner.  Her family believed it was right to move the Native Americans off of their home land, because they were on the property of the government of the United States of America.

Now, in the 21st century, some of that rhetoric still exists today.  We are a nation of immigrants, yet people still believe that not all immigrants have equal rights to the goods, services, and space this country has to offer. To show how important immigrants are to this country, there was a nationwide strike on Thursday, February 16th.  Immigrants were encouraged not to open their stores, go to work, or send their children to school.  Based on the headlines, and articles, this was an effective way to show that solidarity with one another regardless of race or status is what makes America truly America.