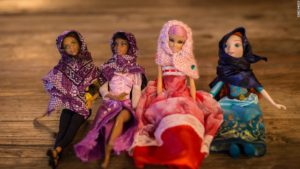 Throughout the semester, we have explored the ways in which different ethnicities are or are not included in the definition of “America”, and we have also explored the way doll play encourages the performance of race or identity. Many times in historical texts, the use of dolls led to exclusion or degradation of minorities, as seen in the discussion of black dolls being used to practice violence in Bernstein’s article. However, in Kirsten Learns a Lesson, we see Singing Bird and Kirsten playing together with dolls that reflect their unique identities. Similarly, a recent story in the news brought attention to a Pittsburgh woman who creates hijabs for dolls, introducing the possibility for more inclusive doll play. Both Kirsten Learns a Lesson and the “Hello Hijab” initiative focus on representations of “America” in ways that foster inclusivity through doll play.

In the story Kirsten Learns a Lesson, dolls play a large role in the girlhood of the characters. Kirsten and her cousins play with dolls who look and act like them, who live in a “house” like theirs and eat cakes like they do. This is a performance of their own definition of “America”. However, later in the text, Kirsten learns about a different definition of this identity by playing with Singing Bird’s doll, who looks and acts like a Native American. By performing her own ethnicity through doll play, Singing Bird exposes Kirsten to a broader meaning of “America” that goes beyond white colonial settlers, and teaches her about another group of people who inhabit the same geographic space. This mutual inclusion and tolerance allows the two girls to forge a friendship. On a similar note, a mother in Pittsburgh, Pennsylvania who is dedicated to exposing her daughter to a diverse doll collection—and thus, a diverse worldview—recently decided to start making and selling doll-sized hijabs for girls to add Muslim characters to their doll collections. The goal, according to the woman’s brand, Hello Hijab, is to teach young girls about inclusiveness and creating a kinder America. Both of these texts relate to the keyword essay on “America” and its discussion of who is included in the homogenized umbrella of “America”. Though originally thought of as a nation of white colonists, America has expanded to house a diverse group of people, nationalities, and identities, and this move towards more inclusive doll play is important in reflecting that.