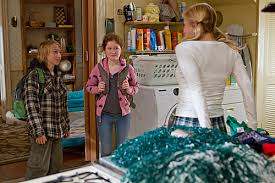 The Showtime series, Shameless, has been blowing up! Everyone can’t stop watching what will happen next to the wild Gallaghers. Each episode they have their ups and downs. All the kids have to grow up and learn how to live without relying on their parents who are never fully in the picture. Their childhood is not what most would consider the normal and nice version; especially for Debbie. Debbie is one of the middle children, and is also the second daughter. During her childhood Debbie has to learn to do a lot of things beyond what she should be worrying about in her girlhood. She doesn’t get normal toys or normal experiences like many girls are known to have. So, when she finally gets to have one of those experiences it gets a little extreme and excessive. Her mother gets into some money, and decides Debbie should have an American Girl Doll because every little girl should have one. They end up coming home with tons of them, not just one or two (“A Great Cause,” Season 2, Episode 10)!

This scene shows how the average person thinks of dolls as a representation of girlhood. Dolls fit very well with the Keyword Girlhood. It seems like a universal symbol for young girls across cultures. We have seen the dolls in almost every single book we have read so far for this class. With Kirsten and Singing Bird, with two completely different languages, they were able to bond over playing with their dolls. Little Women not only had Beth take care of dolls and learn motherly skills from them, but also had a scene depicted Meg dressed-up as one. In The Bluest Eye, Claudia tells us how she actually dislikes her white doll because she can’t relate to it, and it represents racism for her. The Doll seems to represent the girl in a way, or what they hope to become. It shows their innocence and youthful state of mind. The girl can project their clothing styles on the dolls, which can also show us their age. The play they script for their dolls does a good job of letting us see their psychological development whether it shows them trying to teach their dolls or mother them, or even just bond and play with the doll. By looking at their doll alone, it can show us the cultural beliefs they follow.

A doll can be so much for young girls in their childhoods. To look at a young child’s doll just might give you a glimpse into who they are,  what they feel, believe, or think. By seeing Debbie Gallagher come home with 10 or more American Girl Dolls, it can show us she feels that she really missed out on some important experience or feeling in her childhood.

1 thought on “Debbie and the Army of American Girl Dolls”