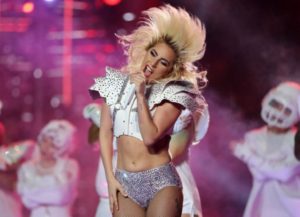 Recently many people have been in an uproar in regards to Lady Gaga’s Super Bowl performance. It is not the performance that is being criticized, but instead her body. During her performance she changed into a top exposing her stomach and within minutes social media was blowing up with hateful comments directed towards the size of her stomach. Once Lady Gaga learned about these disgusting comments she immediately responded with a statement telling the world that she is proud of her body and believes everyone should be. Today, women are almost always under fire for how they look. One can never seem to fit society’s “body standards” and is either overweight or underweight.

On the flip side, society is currently culturally appropriating the term “dad bods”. This term was created due to the pressure on middle aged men to go to the gym and fit society’s standards of a buff washboard ab figure. So instead of society jumping on men and criticizing them for their “dad bod”, they are understanding and accept the men for who they are whether that be junk food eaters or gymaholics. So why is society so quick to judge women but not men? 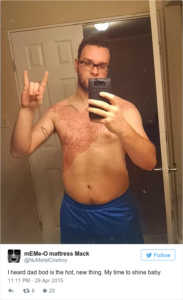 This can seem very conflicting to some because the only thing different in the two body situations is gender. This situation connects strongly with the discussion and display of the term body in both The Bluest Eye by Toni Morrison and the Keyword essay Body by Kelly Hager. In the keywords essay Body written by Kelly Hager she speaks deeply about “marginalized bodies” due to being a minority or of a specific race. In this situation, Lady Gaga, the social minority, is considered to have a “fat body” which is not the stereotypical model thin body society idolizes today. This same hatred is not portrayed on men with dad bods because they are the social majority. In The Bluest Eye by Toni Morrison the toll of body marginalization is clearly shown through the main character Pecola. Also, this story displays many of the negative effects idealizing one body type and marginalizing others can have on human beings. Lady Gaga’s statement about how she believes everyone should be proud of their body is easier said than done in society today, but I believe it is the only way one can veer away from such negative comments.