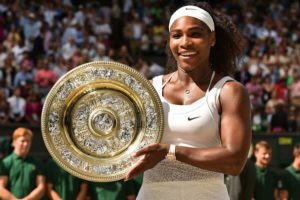 When the news broke earlier this week that pro-tennis champion, Serena Williams, is expecting her first child, the media was just as ecstatic as her fans. Many people are astounded and impressed in realizing that Williams won the Australian Open during the beginning of her pregnancy as well as the fact that she was just named the number one player in the world. Talk about girl power!

Serena Williams already said she will return to tennis next year and continue her successful career of 23 grand slam titles. She represents just how far women have come in how motherhood and careers are looked at in society. This is part of how society and the idea domesticity has been redefined in modern times. In Claudia Nelson’s Keywords essay on Domesticity she says, “ The recognition on achieving and maintaining what is domestic, whether defined as intimacy, familiarity, or housewifery, is often neither easy nor pleasant.” This is an accurate observation which we saw in books such as Little House on the Prairie, Little Women, and even The Bluest Eye, where there is a specific expectation that women will take care of the home and children. Ma would cook all the meals and stay back at the house with the children in Little House on the Prairie, much like Marmee and even Meg in Little Women. This was also the case with Mrs. Breedlove, in The Bluest Eye, taking care of the home of the white family as well as their children. Women dealt with the constant societal pressure as well as criticism from their husbands, their families, and their neighbors to fulfill domestic expectations and not much else.

It is amazing to see that in today’s world we have a better understanding of the power of motherhood and the capabilities that women have as mothers. Furthermore, it is embraced and celebrated that women are working mothers, instead of confining them to the outdated idea of a singular role for women in the home.

Yet, while our society has made some progress regarding women and motherhood, we still have a long way to go. Williams faced hateful and racist comments directed at her and her unborn baby by a professional male tennis player this past week. She responded in a composed and collected manner, which is representative of her character, but the fact that she has to defend herself and her child from those types of comments is extremely alarming. Serena Williams is proof that being a woman with a career as well as a mother is not only possible, but incredibly empowering.

8 thoughts on “Another Grand Slam for Serena Williams”