Tomorrow, April 26th, marks a day called Denim Day. Aimed at standing with victims of sexual violence. This day asks you to simply put on a pair of jeans to show your support. Why jeans? In a specific case in 1999 it was ruled that because the girls jeans were so tight she must have helped take them off therefor making her attack consensual instead of rape. This is yet another horrific example of how the blame is not put entirely on the rapist themselves as it should be. As a result this movement has started to show support and raise awareness for the all too prevalent issue. Aside from just wearing jeans some city chapters and organizations have also began to hang jeans and put on different displays to also promote the message. 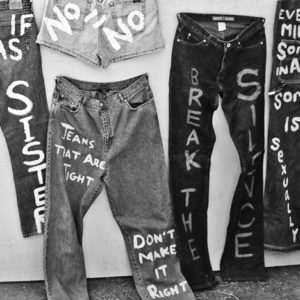 luest Eye. Victim blaming suggests that it is not entirely the rapists fault. With the idea, there lies the assumption that the victim could have gotten out of it or could have done something to run away or fight back. In the case of Pecola in The Bluest Eye she is about 12. The rapist therefor has more control and ability to dominate their victim. However, there still will be circumstances and individuals that will still see the victim as having the ability to get out of the situation.

The keyword that relates to this idea is the word “Body”. While a body exhibits identifying features it also leads to vulnerability. Sometimes, individual’s bodies are taken advantage of and treated as just a cloak of skin rather than what someone has felt comfortable in their whole lives. Bodies are often associated with sexuality and sex. In cases of rape, one’s conformability of their body is taken away and instead of a proud identifying feature is a remembrance of what occurred to them. It is societies duty to help these victims be comfortable with themselves again by ensuring that it was nothing they did wrong, or nothing that was wrong with them that led to those awful events happening.

I find this movement especially captivating due to the time frame in which we are still showing support for a rape survivor from almost two decades ago. Sadly there are many more cases like hers where the victim is put at fault for the events that occurred, even more saddening is that many of the cases go unnoticed, unheard, or not believed.

A relatable saying I’ve heard is how we shouldn’t be telling girls what not to wear but instead telling boys to not rape. 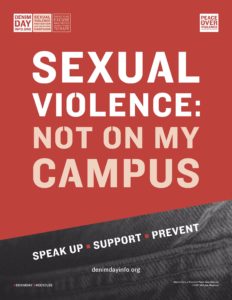 Rape is never the victims fault but always the rapists.