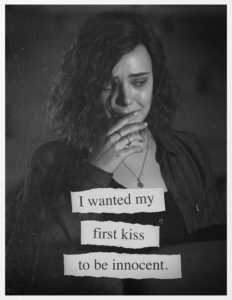 On March 31st, Netflix debuted the TV adaptation of Jay Asher’s young adult novel, Thirteen Reasons Why.  Although the show has been met with great praise and popularity, many critics were quick to point out its graphic nature, specifically in the multiple scenes depicting sexual assault. The scenes are reminiscent of Toni Morrison’s novel, The Bluest Eye, and its detailed descriptions of incest and rape. These two platforms of realistic fiction use violence and and personal tragedy to develop their characters and their complex relationships with others, and to shed let light on the truths of sexual assault.

Throughout the course of thirteen episodes, three incidents of violent sexual assault are portrayed in the Netflix series. These scenes do not just hint at the deed being done, either. Instead, the viewer witnesses the acts in their entirety, as well as their after-effects on both the victim and the assaulter. The main argument against the show’s graphic portrayal of rape is that it is inappropriate for young viewers or it may be triggering to victims of sexual assault. The purpose of including these scenes, as occurrence argues in her article, is to “portray the realities of rape, and the repercussions for the victims” (occurrence). The directors use this realism to demonstrate the fact that events occurring in fiction can be directly translated into the external world and, therefore, impact the way people view issues such as sexual assault.

Toni Morrison, who is known for her inclusion of rape and incest in her novels, uses realism in ways that mirror those in 13 Reasons Why. Her 1970 novel, The Bluest Eye, does not skip any details when discussing sexual assault. The most pronounced occurrence of rape is between the character Cholly and his 11 year old daughter, Pecola. For example, Morrison writes, “…and a bolt of desire ran down his genitals, giving it length, and softening the lips of his anus…The tightness of her vagina was more than he could bear,” (162). Although the narrative may be found disturbing, it is a description of human nature. Morrison does not sugar-coat when describing this act of incest, which allows the reader the enter the mind of the assaulter to better understand his motives and translate them into real-life contexts.

Cathryn M. Mercier’s  essay, Realism, helps better explain the practical uses of realist fiction. Most notably, she describes realism’s role as a barrier between children and adult literature. Without the use of graphic, authentic depictions of sex and sexual assault, 13 Reasons Why may be viewed as a show specifically for middle school or high school children. The reality of its content, however, elevates the show to the level of young adult or even adult viewers. This then makes the message of sexual assault and its negative consequences accessible to those who may use it most. Morrison also uses realism to depict the dark sides of society. Her form of literature is “less invested in protecting the reader’s innocence and packaging hope as a take-away for the reader” and more focused on developing her characters’ complexities and exposing the harsh realities of rape and incest. Both 13 Reasons Why and The Bluest Eye use fictional realism as a platform to address the prevalence and effects of sexual assault.

1 thought on “The Reality of Rape: 13 Reasons Why and The Bluest Eye”