I recently watched Hidden Figures, and it was so intriguing I had to search for more information. The movie came out a few months ago and was immediately a box office hit. Starring Janelle Monáe, Taraji P. Henderson, and Octavia Spencer, the movie celebrates the incredible contributions of 3 black women to our nation’s history in the 1960s. These women were extraordinarily smart and were known as ‘human computers’, working for NASA to try and figure out how to safely get men to and from outer space. They were looked down upon and not given the same opportunities as their white male or even female counterparts, yet they still were a huge reason on why the mission and future ones were successful.

In my opinion this movie highlighted so many of the concepts that we addressed in class. First, I think Janelle Monáe’s character, Mary Jackson has a lot of similarities to Jackie in Brown Girl Dreaming, the biggest of which being their longing and effort to pursue to career of their dreams. Jackie was so badly to be a writer and when she finally gets there she uses her childhood and past experiences as inspiration for her writings. Mary Jackson also took inspiration from her struggles and uses it as motivation to help herself become an engineer and eventually helped others reach their own goals.

The keywords ‘Education’ and ‘African American’ also apply well to the story in the movie. These were all college graduated African American women would were trying to push through the class ceiling. While working in a predominantly white male field they had to work harder because they were women, and then they had to work in a separate place and area because they were women of color. Nothing came easy and they to do more just to prove to everyone that they were of value and were essential in this specific job. At this time, the same levels of education were not universally available to everyone. Mary Jackson had to get special permission and take night classes when the class size was smaller to be able to be a certified engineer. Katherine Johnson, Taraji P. Henderson’s character, was asked to work in the room with all the white males because they needed her to preform the specific complicated calculations. She wasn’t allowed to use the bathroom in that building so every time she had to go she had to run a mile to the ‘colored’ building. She was then scolded for being gone for so long, and the only thing preventing her from using the other bathroom was the ‘whites only’ sign.

Watching this movie while being enrolled in the class was very eye opening. It’s crazy to think that not even 40 years ago these stigmas and issues were still so apparent. This movie should’ve been made a long time ago and these women and what they did should be in our history books. They helped pave the way for many other women by breaking their glass ceiling and trying to reach their full potential. 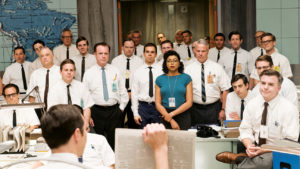 2 thoughts on “The relevance of Hidden Figures”