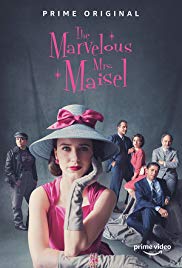 In the keywords essay Domestic by Claudia Nelson, domestic is defined as a term relating to all things “home.” This relates to the fact that household pets are referred to as domestic animals, the nation is referred to in terms of domestic policy, and how the tasks of the home are usually known as being more domestic. This also can be gendered since domesticity is more associated with girls than it is with boys, as seen in the essay. This is also a reason why during adolescence, girls are taught to play house or take care of their baby dolls to teach those home skills earlier on. Some of these domestic tasks and their gendering play a part in Little House on the Prairie by Laura Ingalls Wilder. I’ve also recognized this in the  show The Marvelous Mrs. Maisel.

The show The Marvelous Mrs. Maisel’s season 2 came out in December of 2018. It was heavily promotes and they ran advertisements through many social medias especially on the weeks right before it premiered. After seeing all of these advertisements, I decided to watch the first season to see what it was all about. The show is centered around a woman named Miriam in New York during the 1950s. She has the “perfect life.” She has a loving husband, two children, and an upscale apartment on the Upper West Side. She is a housewife that maintains the home and entertains guests when the family hosts events. She is the picture of a trophy wife, essentially. After a few episodes in the first season, she discovers that she has a knack for comedy. This jeopardized her life since it took her away from her duties at home with her family. Although this show is set in a distant time period, the ideals of “womanly duties” are still very much alive in many parts of the world, even partially in the United States. Miriam has to choose between doing something that genuinely makes her happy and something that is imposed on her just because she has to fit the mold of the perfect stay at home, trophy wife that only is there to please and serve her family.

In Little House on the Prairie by Laura Ingalls Wilder, the story is about a family in the 1870s who move from a farm in the Midwest to a Prairie in Kansas. The story is told from the perspective of Wilder herself. Her and her younger sister are taught from home. The two are taught how to maintain the house, cook, and tend to the garden while their father finishes building the house and doing more physical labor. The girls are taught more how to be a good wife and mother than how to thrive or even survive in the environment that they are in. Now, this could be the case since they are quite young, but the move put the family in a different area that could have ended badly. The girls should now how to do basic survival techniques in the environment in case of bumps in the road. Whenever I think about this book, I try to imagine how different the story would have been if Laura had had a brother rather than a sister and just how different their education and chores would have been from each other. I feel as though, just because they were girls, their tasks and chores were more domestic minded.

I feel as though both of these media types reflect a taught idea that women and girls are defined to only fulfill more domestic roles in their lives. It is frowned upon for them to follow their own paths that could possibly stray from the home and the duties of the household.