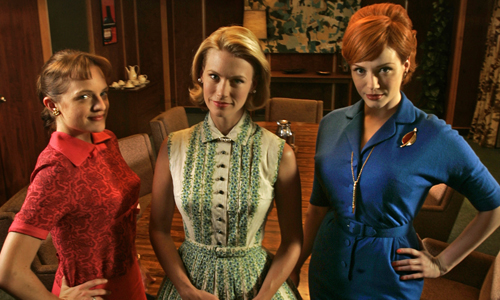 Mad Men is a television series that follows the lives of advertisers and their families in the 1960’s. The show features an abundance of drugs, alcohol, infidelity as well as strong sexism and racism. Mad Men highlights ideas of almost an keyword studied throughout the semester, however domestic is a strong word to analyze when considering the show’s responses to females. Domestic finds itself as a keyword in the women of Mad Men and Little Women by Louisa May Alcott through society’s responses to their positions and duties within it. The essay on domestic by Claudia Nelson discusses how domestic holds distinct different meanings and in this case we will consider the definition pertaining to households. Domestic roles of women are thought to be cooking, cleaning, taking care of the children, being married and various other household duties. Therefore the word domestic is often associated with girls and women, as seen in both Mad Men and Little Women. Little Women as it follows the March girls gives four different accounts of the word domestic. Throughout the book they are to follow societal standards of the 1860’s. These most obviously include a lot of what was mentioned before and a heavy point in the book is the idea of marriage, an important part of the flow into domestic duties. The girls also focus on things such as looks and how they will be perceived by not only men but the public in general. Mad Men though in the 1960’s has its women characters following these same ideals. As a lot of the keyword essays from class suggest, these words evolve as time evolves. Therefore the domestic circumstances of Mad Men are a little different, however the viewer sees first hand accounts of the housewife from Betty Draper. Betty like the March girls does all of what a women would be expected to do the difference is in that Betty does not always follow the exact domestic roles because this was more accepted in 1960.The women in the office are looked down upon by the men and are distinctly told to do whatever they ask including sex and drinking. Mad Men gives the domestic ideas of Little Women in a harsher way and in a sense a view of it from a male perspective. This male view does not change the clear relationship between the term and these works.