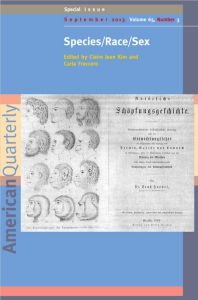 “Animal Humanism: Race, Species, and Affective Kinship in Nineteenth-Century Abolitionism” American Quarterly 65.3 (2013) [LINK] [LINK] “As nineteenth-century scientific theories of racism sought to justify slavery and oppression by dehumanizing black people, popular abolitionist arguments often emphasized the humanity of enslaved black people by likening them to free white people, most popularly in the figure of the mixed-race hero(ine). Other abolitionist arguments, however, employed animals as points of familiar reference, in cross-species comparisons that did not simply repeat racist ideologies but solicited interracial sympathy. This essay reads abolitionist children’s literature that deployed a strategy of “animal humanism,” using domesticated animals to mediate their readers’ sympathy for enslaved people. Focusing on the parallel rhetorics of species and race in children’s literature, the essay centers its discussion on the abolitionist revision of Maria Susanna Cummins’s novel The Lamplighter (1854) in The Lamplighter Picture Book(1855), other abolitionist literature for children, and political cartoons in which species and racial difference figure. As pets are construed as both domesticated and domestic in these texts, the possibility of cross-species kinship presents a more proximate familiar relation than cross-racial kinship. Attention to these uses of domesticated animals reveals the limitations of sympathy that is more easily mediated through species rather than race. However, readings of the animal as not only familiar but familial open new possibilities for an abolitionist sympathy that has antiracist potential in its ability to be mediated through acknowledged positions of difference rather than a dependence on sameness.” 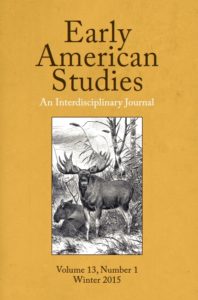 “’Those people must have loved her very dearly’: Interracial Adoption and Radical Love in Antislavery Children’s Literature” Early American Studies 14.4 (2016) 749-780. [LINK] [LINK] “This essay reads Harriet and Ellen as an interracial adoption story of radical, antiracist love….in its promotion of antiracist kinship, particularly in its representation of white people who are capable of valuing a black girl as a family member as worthy of inclusion as a white, biological child. Harriet and Ellen aims toward incorporating black children into the liberal norms of family and nation state, but at the same time it insists, as did both white and black radical abolitionists, that the neither the family nor the nation can be based in white supremacy. The white supremacist system of slavery is ultimately what kills the novel’s main characters, foreclosing the lives and lineages of both white and black children. In other words, Harriet and Ellen proposes that if white or black children would have any future, it could only be through the forms of kinship advanced by white and black radical abolitionists: in families that produce equal measures of love and care in kinship across racial difference. Insofar as families further the aims of the nation – reproducing forms of race, kinship, and power – the model of kinship and care at the center of Harriet and Ellen projects a fundamentally different nation than the one these two girls ultimately inhabit.” 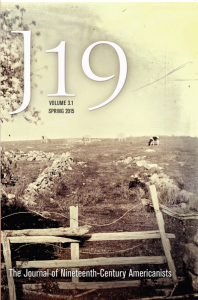 “Visualizing Racial Mixture and Movement: Music, Notation, Illustration” J19: The Journal of Nineteenth-Century Americanists 3.1 (Spring 2015) [LINK] [LINK] “Racial representation has often been confined by the media used to depict its complexity—from language that describes race via metaphors of color to the technology of racial representation in black-and-white that obscures nondualistic racial gradation. Written music, like the written word, is a technology of representation. The visual representation of music and the visual representation of race are similar in that they are not mimetic but symbolic. Just as quarter and half notes stand in for certain pitches and durations that might be interpreted through variations such as instrumentation and style, the presence and absence of black ink represents racial difference that in reality is nuanced by gradations in complexion, historical contexts, and cultural resonances of racialization. Music here implies the aural, but also the movement of dance; the waltz and the march produce bodies in motion. The movement of racialized bodies through geopolitical spaces and with relation to one another hints at race’s fluidity. In the two genres on this single sheet, we see what might be understood as different methodological frames for understanding their respective narratives of race. The waltz’s male and female pairing of partners suggests heterosexuality. The march denotes a different kind of movement, not simply interpersonal but movement through geopolitical spaces and in militaristic endeavors.” 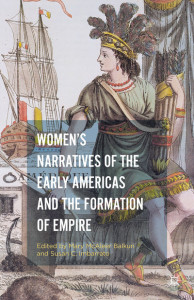 “The Woman of Colour and Black Atlantic Movement” Women’s Narratives of the Early Americas and the Formation of Empire, edited by Mary McAleer Balkun and Susan C. Imbarrato, (London and New York: Palgrave, 2016) [LINK] [LINK] “I read these black Atlantic circulations through the friendships between this mixed-race heroine and both her white governess and her black maid. Following Paul Gilroy’s construction of the black Atlantic as a space of movement, I consider Olivia’s movement within the frames of identification that position her relative racial privilege somewhere between white English/creole Mrs. Milbanke and black Dido. Olivia is constituted by not only the fluidity of racial mixture but also, as a member of the black Atlantic diaspora, the community to which she returns at the end of the novel. Though representing only its mixed-race heroine’s experiences in England, The Woman of Colour suggests larger considerations for racial relationships within slave-holding empires and the black diaspora. This black Atlantic frame and Olivia and Dido’s return to Jamaica at the novel’s end affirm that we ought not to read figures of racial mixture only through their orientation toward white relations and Anglo society.” 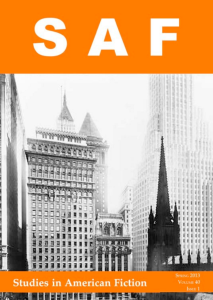 “Almost Eliza: Genre, Racialization, and Reading Mary King as the Mixed-Race Heroine of William G. Allen’s The American Prejudice Against Color” Studies in American Fiction 40.1 (2013) [LINK] [LINK] “In 1853, Mary King, the white daughter of abolitionists, was engaged to marry William G. Allen, the “Coloured Professor” of New York Central College at McGrawville.1 The engagement stirred their upstate New York community into a popular controversy, inciting letters of family disapproval, newspaper commentary, and mob violence leading to their forced, though temporary, separation. Alongside his personal account of their engagement and marriage, in The American Prejudice Against Color: An Authentic Narrative, Showing How Easily the Nation Got into an Uproar (1853), Allen also reprinted various letters and newspaper articles both in support of and in opposition to his and King’s marriage. This array of accounts show how Mary King’s white womanhood becomes a function of genre: in the various stories of her relation to Allen, King’s race and sexuality are constructed according to the practices of reading her as either the white damsel of the captivity narrative or the mixed-race heroine of abolitionist fiction….The writing and rewriting of the Allen-King relationship demonstrates how the racialization of characters within specific literary genres structures how living people are “read” according to similar processes of racialization.”

“Black Girls, White Girls, American Girls: Slavery and Racialized Perspectives in Abolitionist and Neoabolitionist Children’s Literature” TSWL: Tulsa Studies in Women’s Literature 36.2 (Fall 2017) 323-352. [LINK] [LINK] “Reading abolitionist and neoabolitionist girlhood “racial pairing stories” from the nineteenth and twenty-first centuries, this essay shows how children’s literature about interracial friendship represents differently racialized experiences of and responses to slavery. I present fiction by women writers such as Harriet Beecher Stowe and Lydia Maria Child alongside Sarah Masters Buckey and Denise Lewis-Patrick’s American Girl “Cécile and Marie-Grace” historical fiction series in order to show how such literature stages free children’s relationships to slavery via their own racialization. While nineteenth-century abolitionist children’s literature models how to present slavery and racism to free, white children, the American Girl series extends this model to consider how African American children’s literature might suggest black child readers and black children’s specialized knowledge about racism. The “Cécile and Marie-Grace” model of narration and scripting of reading practices also promote cross-racial identification, suggesting that, because children read from already racialized perspectives that literature also informs, both black and white children might benefit from seeing alternating perspectives of slavery represented. By further re-thinking the boundaries of who might identify with other enslaved or enslavable child characters, we might unveil more radical antiracist potential in this children’s literature.” 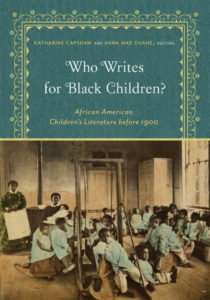 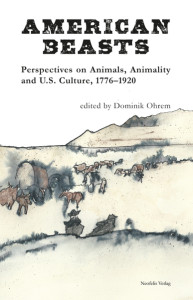 “Black Dogs, Bloodhounds, and Best Friends: African Americans and Dogs in Nineteenth Century Abolitionist Literature” American Beasts: Perspectives on Animals, Animality and U.S. Culture, 1776-1920 ed. Dominik Ohrem (Germany: Neofelis Verlag, 2016) [LINK] [LINK] “This essay will explore the different appearances of dogs in Stowe’s novel in order to suss out the contradictions inherent in the comparisons of enslaved African Americans to dogs and their various relationships to them. Reading Harriet Beecher Stowe’s Uncle Tom’s Cabin for both its importance as an abolitionist literary phenomenon as well as for the ways it is representative of the most common ways we see dogs depicted in abolitionist literature, I focus on this text as an exemplar of the way dogs operated in simultaneous and even contradictory ways as antislavery writers depicted their relations to enslaved, black people. Abolitionist arguments that decry black people treated ‘like dogs,’ depictions of bloodhounds employed in slave-hunting, and black people’s relationships with familiar dogs as pets point to the competing, yet complexly-related resonances of dogs in abolitionist literature. When the complexity, variety, and contradictions of dogs’ relationships to enslaved people in abolitionist literature are taken into account, we see a fuller human-animal landscape than one that focuses on African American people’s dehumanization. While the dehumanization of African American people is, undoubtedly, an important factor in the history of racial oppression, the multifaceted comparisons and relations of black people to animals presents a fuller picture of how both oppression and resistance occurred in a landscape of not just human, but also human-animal relations.””

“Blackface Desdemona: Theorizing Race on the Nineteenth-Century American Stage” Theatre Annual: A Journal of Theatre & Performance of the Americas 70 (2017) 39-59. [LINK] 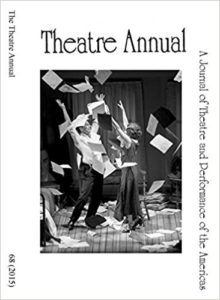 “This essay explains how blackface performance came to bear upon representations not of Othello, but of Desdemona. Here, we see a theory of race that not only registers its apparent materiality and gendered signification, but also literalizes anxieties about race’s movement through the spectacle of racial transfer. These representations of racial transfer ultimately suggest the queer temporalities of racialization inherent in nineteenth-century constructions of white womanhood. Desdemona offers a temporality in which race does not follow normative genealogies of inheritance but works backward from sexual(ized) contact with Othello. First, I discuss how tropes of white womanhood depended upon assumptions about the transfer of race via heterosexual sex in the image of Desdemona “begrimed.” Next, I examine Desdemona’s whiteness via nineteenth-century American readings of her potential re-racialization, showing how this theory of Desdemona begrimed works against normative ideologies of genealogically-inherited race. Moving to a discussion of minstrel adaptations in which Desdemona’s whiteness is refigured in blackface performance, I read a figure I call “Blackface Desdemona” as further complicating this linearity of gendered racialization. Blackface Desdemona simultaneously re-imagines this iconic white woman as racially/sexually “pure” while alluding to actual black women, whose oppression is inherently linked to popular images of Desdemona. Ultimately, examining Blackface Desdemona reveals the implications of Desdemona’s racialization for rethinking American racial theories beyond the normative genealogies of race that continue to dominate racial discourse.”